EK Water Blocks, the European premium computer liquid cooling gear manufacturer, unveiled another sTRX4-based monoblock made for TRX40 AORUS MASTER motherboard. This time, during the development of the monoblock, EK’s engineering team went for a more elaborate approach, which can be seen from the shape of the monoblock. The EK-Quantum Momentum TRX40 Aorus Master has an integrated D-RGB LED strip with the industry-standard 3-pin connector that offers addressable lighting customization from the motherboard software or the EK-Loop Connect controller unit.

This is a complete all-in-one (CPU and motherboard) liquid cooling solution for the Aorus® motherboard that is based on AMD® TRX40 chipset for AMD Ryzen™ 3rd generation Threadripper™ processors. This monoblock is compatible with the following Gigabyte® motherboard:

The monoblock uses the Velocity sTR4 cooling engine to ensure the proper cooling of the large IHS that hides the spread-out Ryzen chiplets. This water block directly cools the AMD sTR4X type CPU and the voltage regulation module (VRM), as well as LAN chips under the I/O cover. This kind of efficient VRM cooling on a TRX40 platform opens up even greater overclocking capabilities. The bottom of the water block features a CNC-milled black anodized cover that houses the addressable LED strip and also has the function of hiding the unwanted LED hotspots. 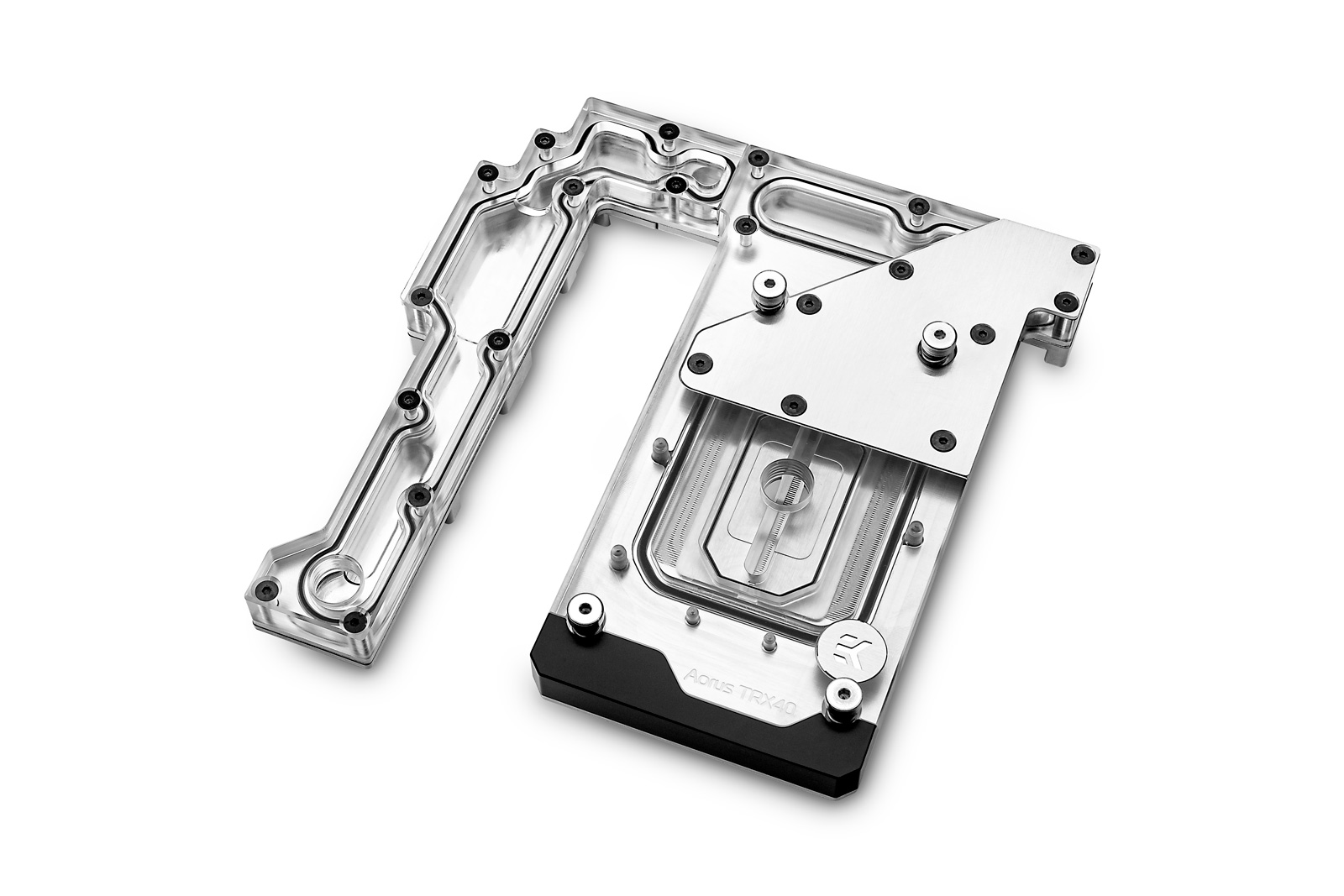 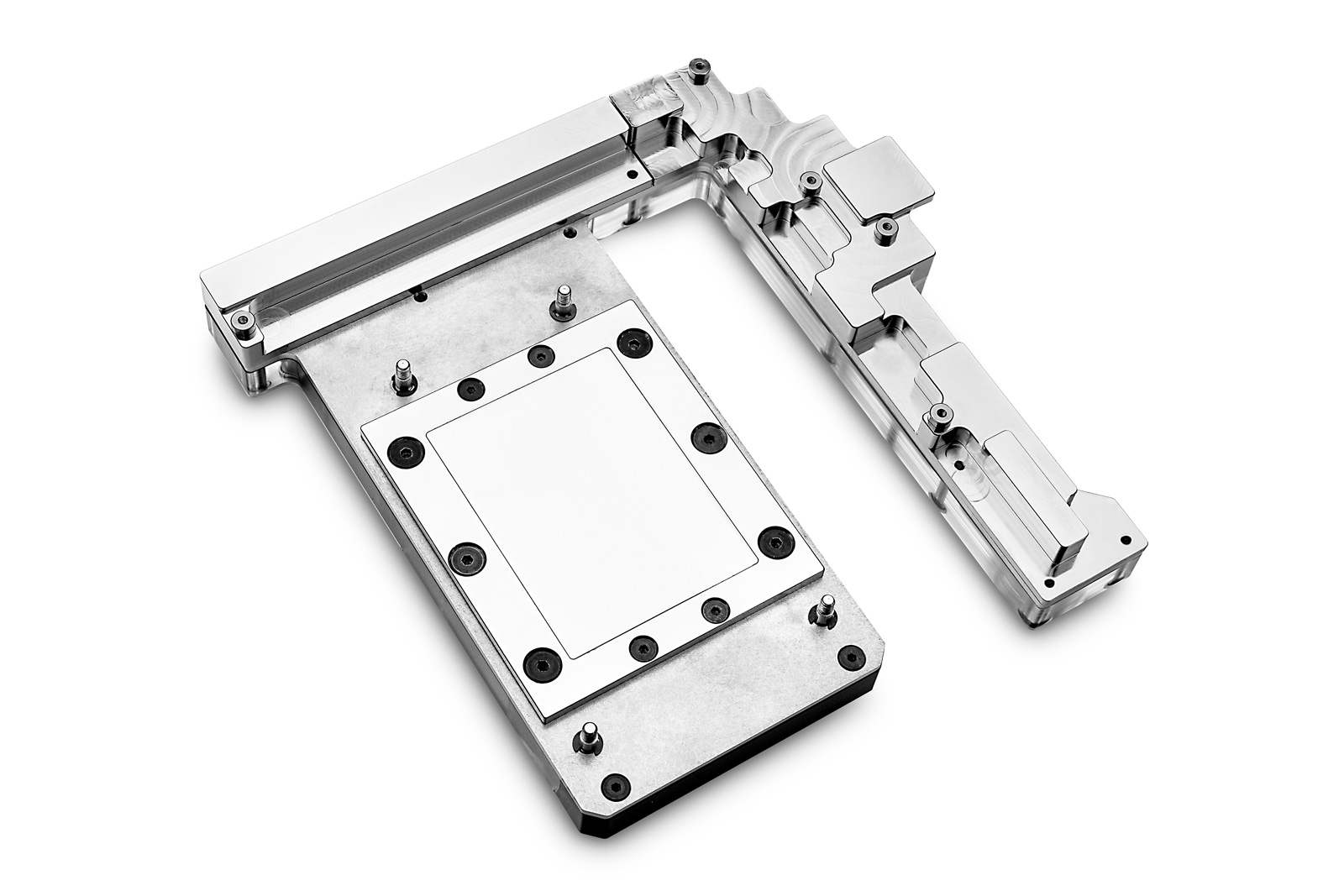 Like with every EK monoblock, EK-Quantum Momentum TRX40 Aorus Master features high flow design and it can also be easily used with the system that has a weaker water pump.

This TRX40 platform-based monoblock also comes with a bigger redesigned cold plate. The new design ensures the monoblock has mechanical contact with the entire 3rd Gen Ryzen™ Threadripper™ processor IHS, thus enabling better thermal transfer. The base of the monoblock is CNC-milled of the purest electrolytic copper while the top is machined the same way out of high-quality glass-like cast acrylic. The main nickel plated mounting screws and brass screw-in standoffs are pre-installed, making the installation process quick and easy. The cold-plate features 91 micro-fins that span across all chiplets within AMD’s CPU, thus ensuring proper cooling for each of them, at all times, even when certain cores work in Turbo mode.

Unlike other solutions on the market, this is a true one-piece, sturdy and reliable liquid cooling product that requires only two connector fittings for proper operation. The bottom left Out port is carefully placed to be on the exact same height as the EK-Quantum Vector GPU block with an EK-Quantum Torque 90° angled fitting installed to it. This makes the tube routing very clean and simple, using just one piece of tubing bent at an angle of 90° to connect it with the GPU block.

The monoblock covers the critical components under the I/O cover, such as the additional VRM components and the dual network chips with active cooling. At the same time, the factory I/O cover is fully compatible with this motherboard cooling solution.

You can always consult our EK Cooling Configurator database where compatible graphics cards and motherboards are being added to the list on a daily basis:

EK-Quantum Momentum TRX40 Aorus Master D-RGB Monoblock is made in Slovenia, EU, and it is available for pre-order through EK Webshop and Partner Reseller Network. This product is expected to start shipping on the 27th of March 2020. In the table below, you can see the manufacturer suggested retail price (MSRP), VAT included.