Delidding can be described as something like „taking cooling to the next level“. But is there anything better than liquid cooling? Well, yes and no. In short, delidding is a „sport“ enthusiasts turn to for achieving better cooling results. Liquid cooling is far more superior than air cooling, and liquid cooling a delidded processor is even more efficient. Stay with us and find out why.

For better understanding of this article be sure to check out our earlier blog called “Thermal Compound Guide” … and if you stumble upon an abbreviation like “IHS” or something that you don’t understand, look it up on our “Liquid cooling glossary” page and you just might find the correct answer! 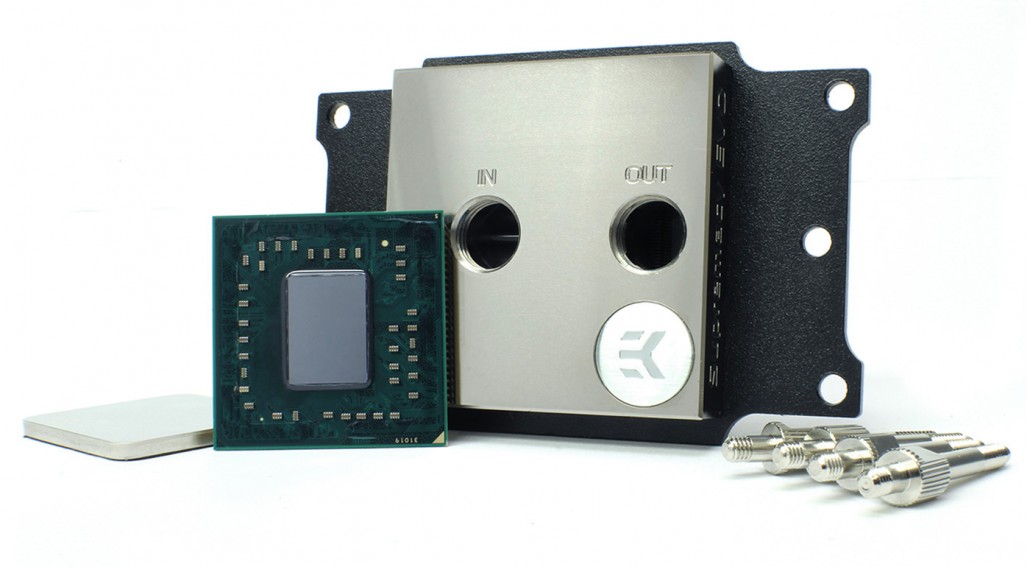 For delided CPU you need special mounting screws for the CPU water block.

So, if you are familiar with the basics, we can move ahead and talk about delidding. The word „lid“ refers to the IHS on a CPU and therefore, in simple terms, delidding means removing the lid. Is there really a need to delid a processor? Well, no.

Delidding got really popular in late 2011 with the launch of the Ivy Bridge microarchitecture which was the third generation of processors based on the 22nm manufacturing process developed by Intel®. The new CPU was the upgrade of the Sandy Bridge architecture and should have brought better power efficiency, lower TDP, and lower temperatures. However, users noticed that their Ivy Bridge processors spiked higher temperatures than the old Sandy Bridge CPUs. This made overclocking a bit of an issue, and overclocked processors were hitting 100°C very easily. 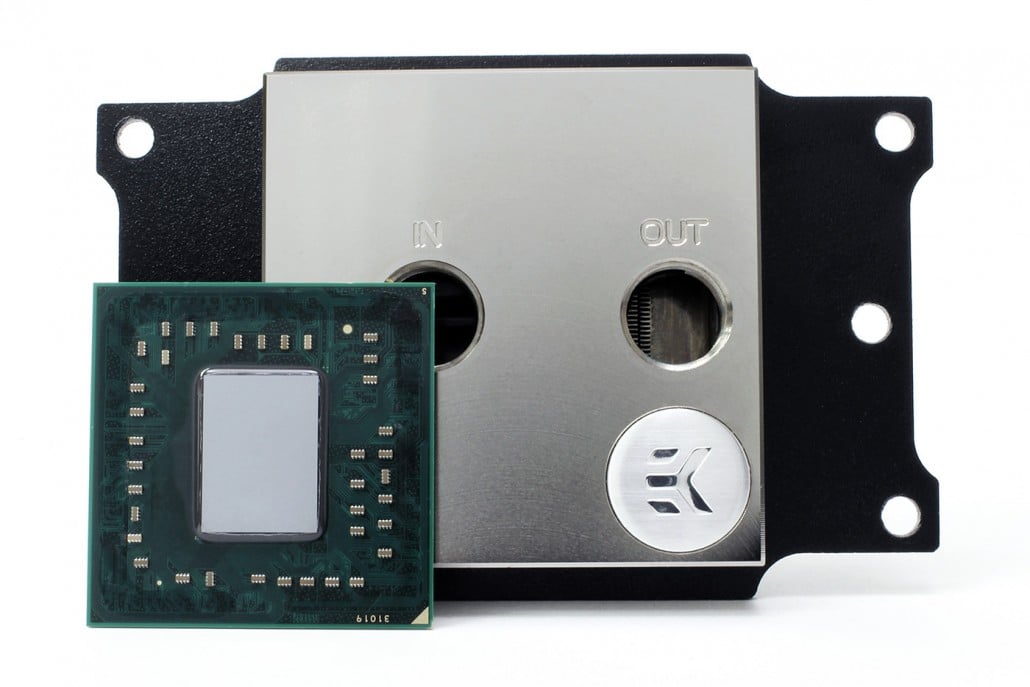 It’s probably important to mention that Intel® processors are not the only ones that can be delidded. It became popular with AMD® processors when they introduced the Llano, Richland, Trinity and Kaveri generations, which are mostly APUs.

So why does the temperature spiking happen? Intel used to solder the IHS to the CPU die itself, right until the introduction of Ivy Bridge processors (one of those CPUs is the Core i7 3770K). The solder made sure that the transfer of heat from the chip die to the IHS was very efficient, but that method was replaced by ordinary thermal paste. As we explained in Thermal Compound Guide, there can be significant differences between using low-quality thermal compounds, high-quality thermal compounds and liquid metal. 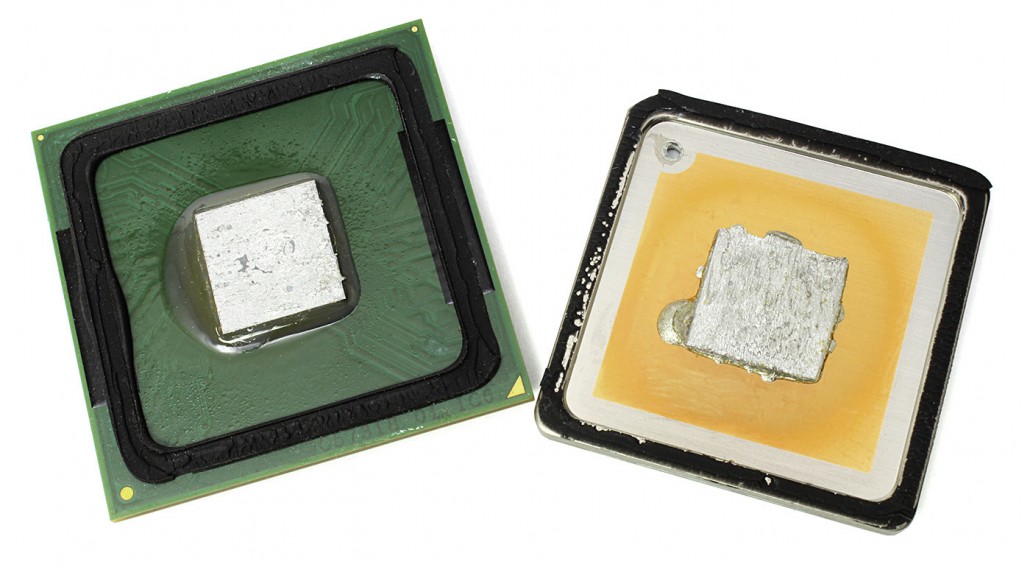 Old Intel® Socket 478 Celeron D – an example of soldering the IHS to the CPU die.

Like always, enthusiasts came to the rescue and made the option of delidding popular. People found a way to pop off the lid without damaging the processor die and they started replacing the factory TIM under the IHS with better aftermarket solutions. Let’s explain the process graphically for a better visual impression

Most users turn to delidding in order to replace the factory implemented TIM, and then put the IHS back. However, it’s widely believed that the improvement in temperatures is not happening because users apply more quality thermal compounds, but rather because of the IHS that gets very close to the CPU die, and in some cases they even touch. 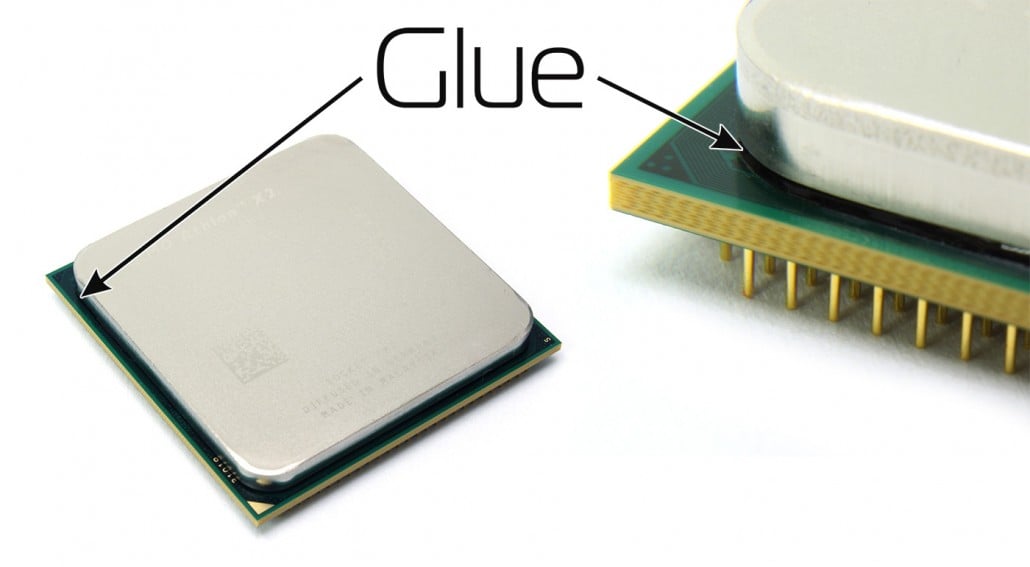 The other solution was to get rid of the IHS and mount the cooler directly on the naked processor. EK has special „naked“ mounting kits available so that users can mount the water block directly on the processor, without damaging it. This all sounds nice and peachy, but you need to keep in mind that if you delid your processor, you will lose the warranty. Removing the IHS comes with a certain level of risk and if you are not careful, you can end up with a dead CPU. 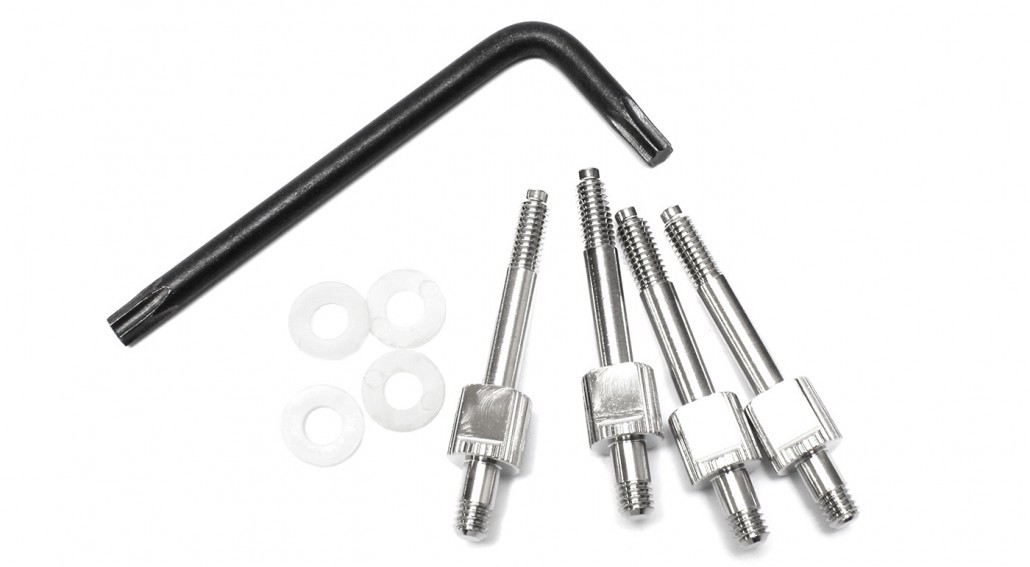 Retention kits for some coolers and water blocks use very strong springs for fastening and excess force on the naked CPU die can cause it to crack. For that reason, we strongly recommend using the EK Naked PreciseMount Add-on for selected Intel® and AMD® processors. These mounting kits are specially designed for EK water blocks and they make sure that the block does not press too hard on the naked CPU.

So how is delidding actually done? The very first deliddings were done with a razor blade or any other very sharp tool. And as we said, the IHS is glued to the PCB, and you can work your way around the CPU die, cut the glue, and thus release the IHS. This is a tricky task because the blade can scratch the PCB and that can ruin your CPU. You also need to make sure that you don’t push the blade in too deep – some processors have various SMD components (resistors, capacitors, diodes etc.) under the IHS. 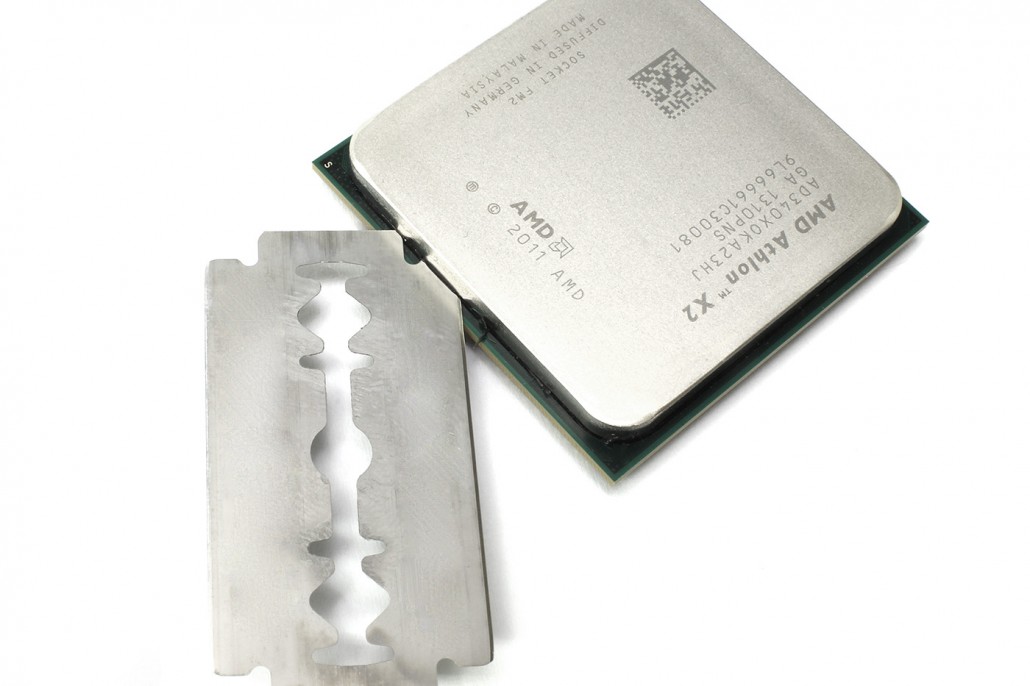 The other, a bit safer way, that became popular was using a vice. Combining the vice with a hammer was an option, but it was risky. This method relied on pushing the IHS sideways until the black glue gave up, which set the IHS free. The trick is to catch the IHS with one side of the vice, and the PCB with the other side. 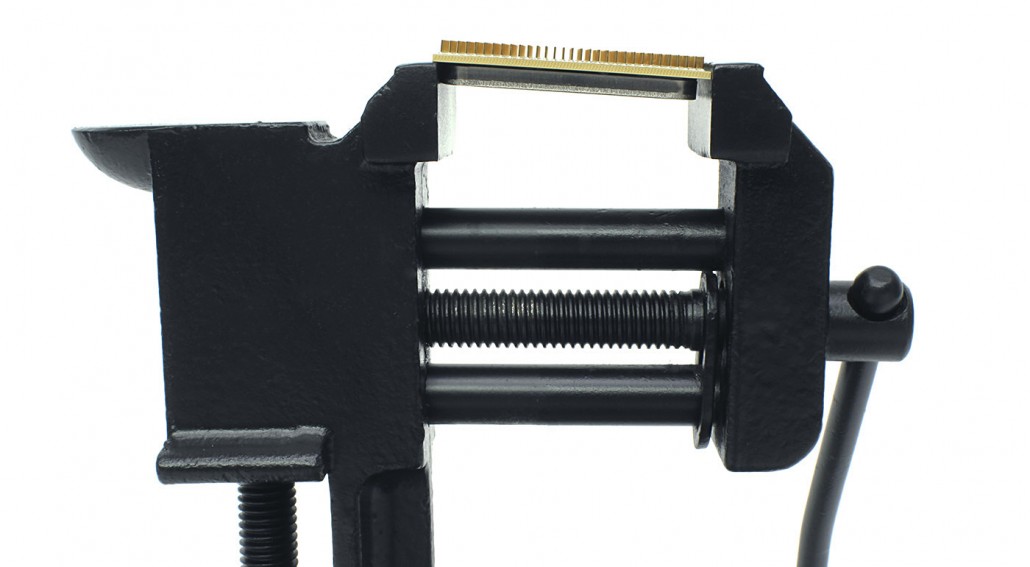 Nowadays, there are special delid tools from various small companies that offer the safest means of IHS removal. One of these tools is the Delid-Die-Mate tool, and there are free 3D printable models too. These tools work on the same principle as the vice method, by pushing the IHS sideways and breaking up the glue. 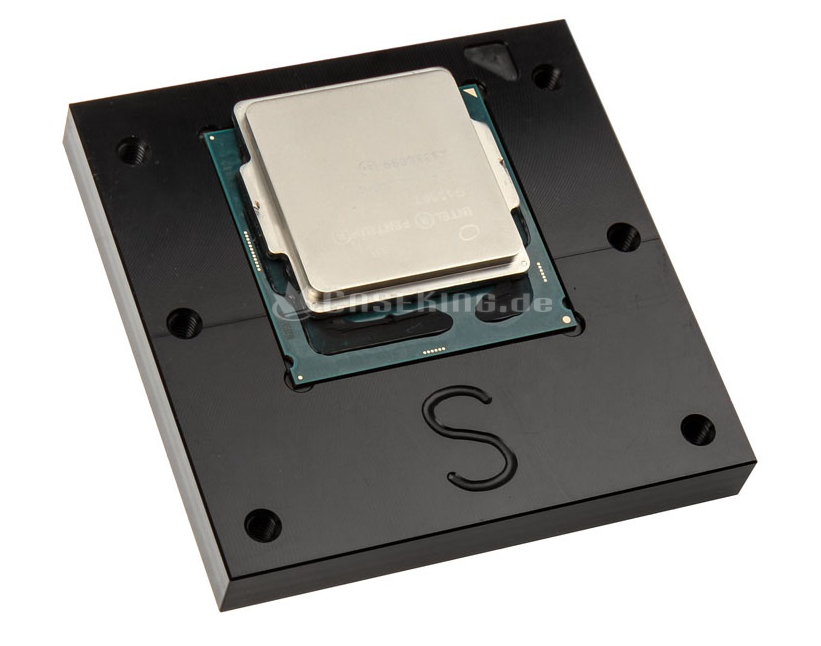 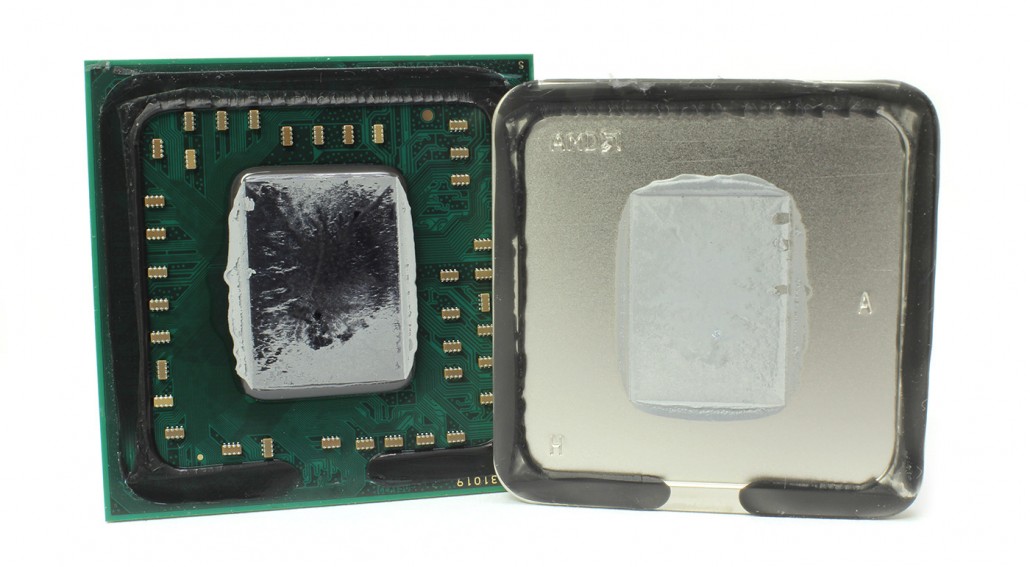 Even some soldered CPUs can be delidded by heating the IHS to high temperatures, but that is a job for hardcore enthusiasts. 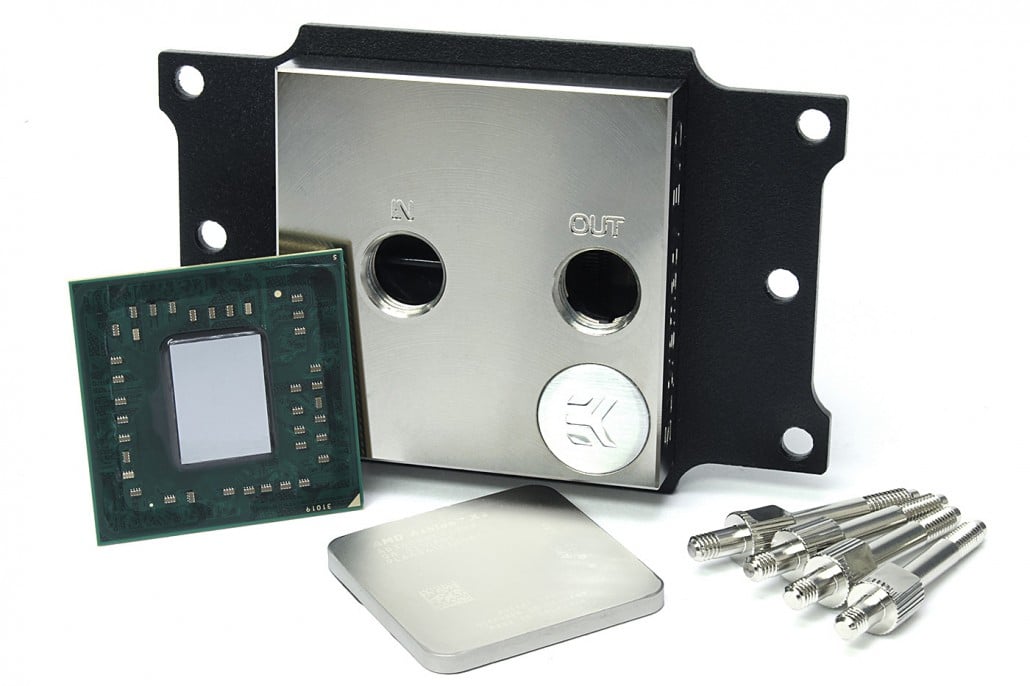 So, if you are an adrenaline junky, just go ahead and delid your brand new processor! But please note that we will not be held responsible for any failed removal operation that resulted in a death of the computer component! We have just tried to explain what delidding is, what it is good for and how it is done.