Parallel vs Serial Loop – Why Choose One Over the Other?

In this article, we’ll look at the two most common ways you can configure your liquid cooling loop and we will be focusing mostly on the GPU block. The most common and usually featured is a serial connection, which uses one inlet to the GPU block and one outlet. The parallel connection utilizes all four ports on the GPU block, and in this blog, you’ll find out how that works and what are the benefits and drawbacks to both configurations.

The serial configuration is the most common one, especially on first-time builder’s custom loops, due to a more straightforward way the liquid flows. 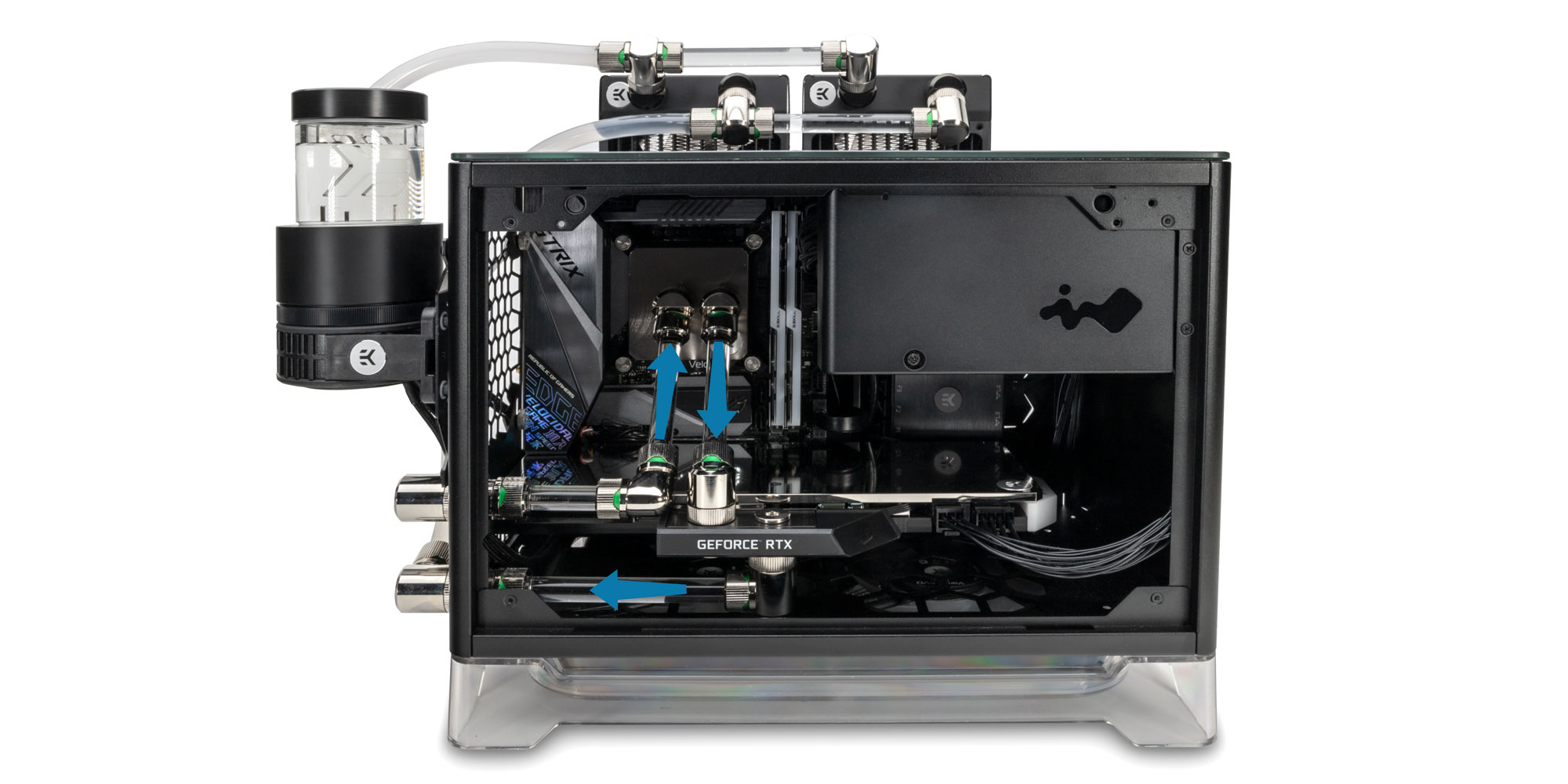 Here, we can see that the liquid flows into the CPU water block inlet and goes from the outlet into the left side inlet of the GPU block, after which it leaves through the outlet port on the right-hand side. So, a single inlet and outlet are used, the coolant goes in, circles through the GPU block and takes the heat away, after which it leaves the block through an outlet. The full flow is first received by the CPU block, and then the GPU block. 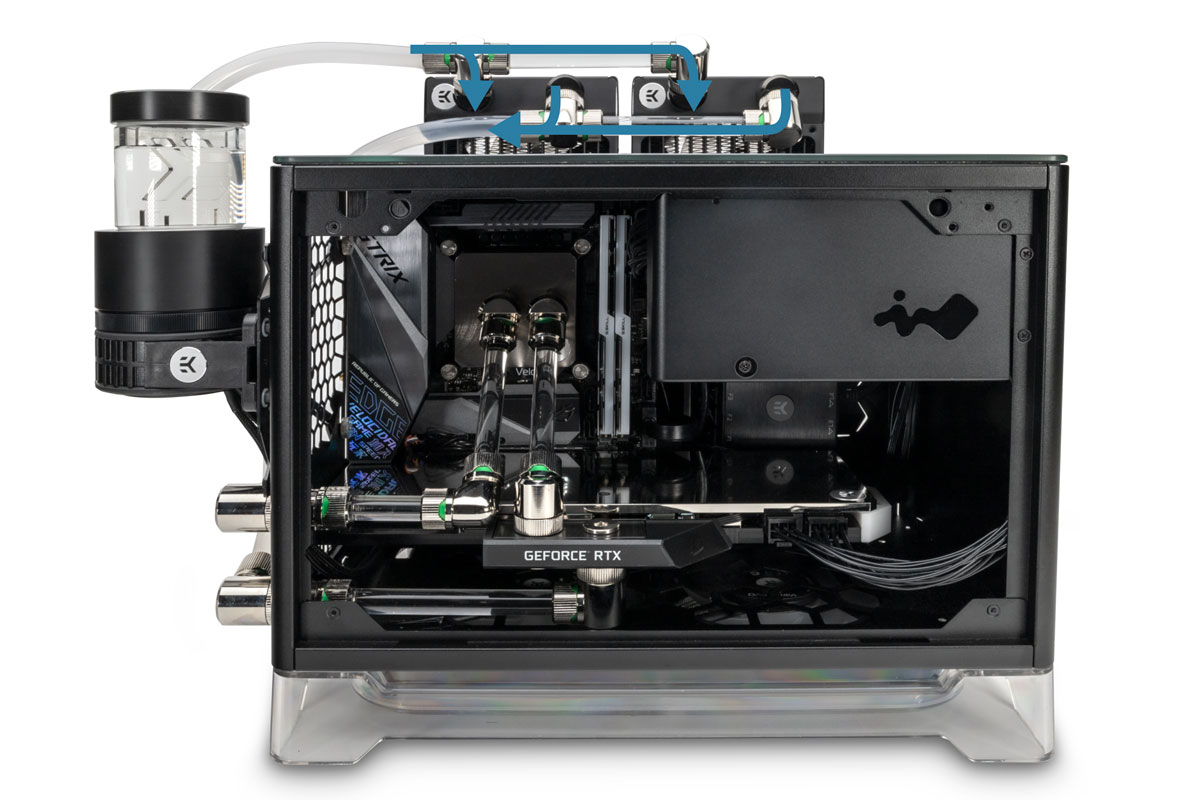 Interestingly, the same build features a parallel flow setup on the radiators that are seen in the back. This can be easily achieved with the newly released EK-Torque Angled T rotary fittings. This way, the coolant flows simultaneously through both radiators.

The parallel connection is not as straightforward, which is why a lot of new builders do not exactly understand how it works. A lot of people would look at the photo below and say the coolant is just going to skip the GPU. Here, we’re going to make it a bit more understandable and easier to comprehend. 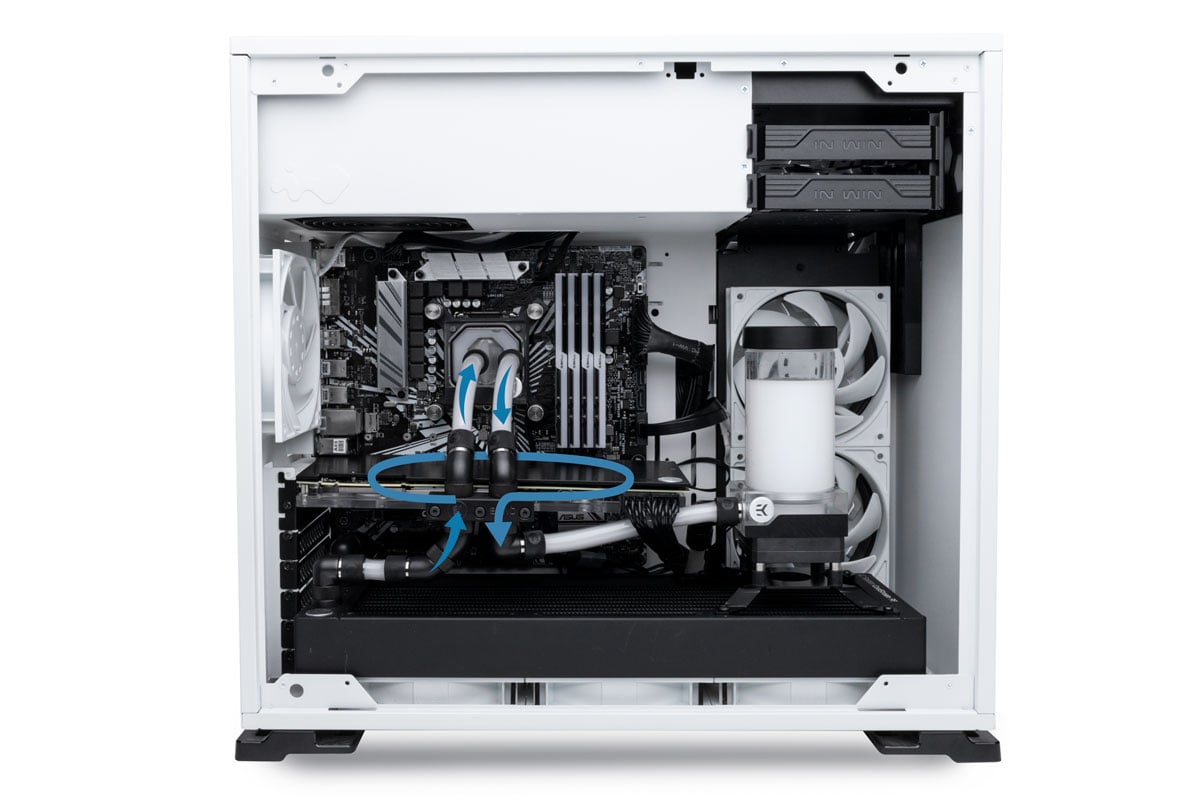 The reason why the liquid splits is that it’s looking for the path of lowest resistance. So what decides how much flow each of the blocks get? Easy! The less restrictive block gets more flow. Luckily, all EK CPU and GPU blocks are designed for optimal flow restriction, so you don’t have to worry about that.

If you’re using, for example, an EK-Kit Classic RGB and you bought a GPU water block planning to run a parallel loop, you’d need to purchase 4 additional fittings instead of regular 2 per component. As you can see on the picture above, you’ll be utilizing all four ports thus requiring four new fittings. Just make sure to respect inlet and outlet on the CPU block, which is more important than on the GPU block. If you want more info why, click here.

After clarifying it like that, the overall temperature differences between serial and parallel loops are quite minuscule. When going serial, the first block might get insignificantly more cooling power than the next one in line, while in a parallel connection, they both get slightly less cooling due to the split flow. Eventually, it roughly evens out when you take all cooled components into account.

The main reason for going either parallel or serial is the overall aesthetics. A parallel loop can be done much cleaner if you have all liquid cooling components in one area of the case. Just like in the second picture, where all water cooling is in the bottom and middle part of the case, making the parallel loop a clear winner for aesthetics and tube routing. One downside of parallel connection is that you need two more fittings to utilize all four ports. Picture one utilizes the serial link between GPU and CPU blocks, while the parallel one is found between the two radiators on the outside of the case. We hope we’ve made both of these loop styles a little clearer to the less experienced users and that this article will help them choose the one that better fits their build.

Did you know that you can open your blocks without voiding warranty?
Scroll to top