Because VisionTek feels the "coolest" computer hardware product introduction at the 2014 Consumer Electronics Show (CES) deserves the "coolest" launch event, the $550 MSRP card will be demonstrated during a media invite only event January 8th at the Minus5 Ice Bar. 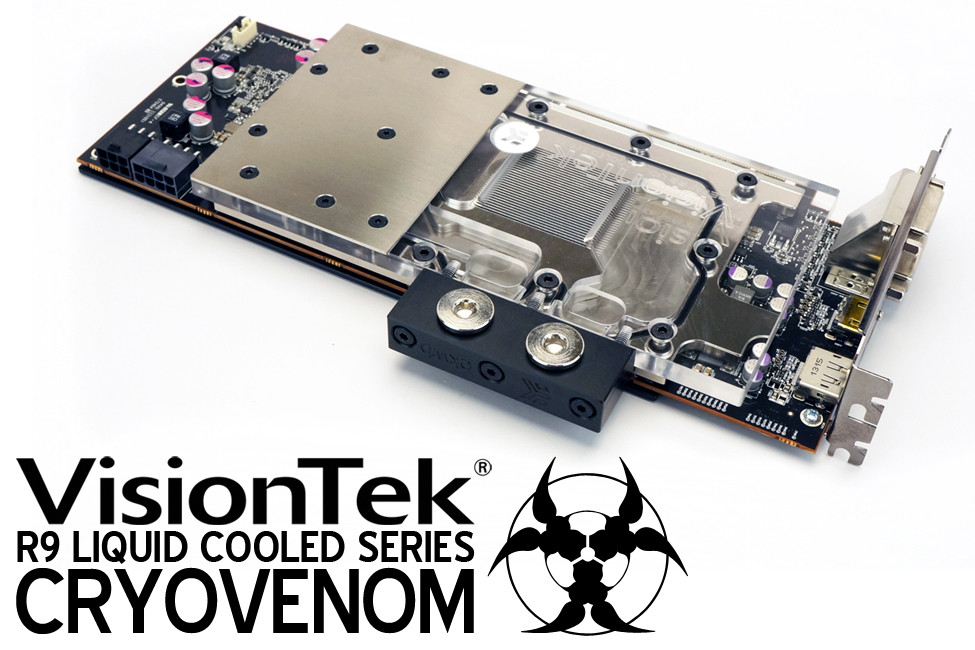 How The Best Gets Better
The Radeon R9 290 series of graphics cards are rated by many sources as the best graphics cards available today. However, VisionTek engineers discovered that when its R9 290 graphics card was 100% utilized in the testing lab under conditions such as extended game play – the card’s temperature could climb to 201°F. Even with very efficient fan cooling and the latest AMD Catalyst driver that provides a 100% fan speed operation, the card’s built-in thermal safety feature would downclock the GPU from the factory 947MHz speed to as low as 662MHz. Combined with this performance reduction of 30%, the increase in fan noise was measured at 71dB, a sound level considered louder than a normal conversation.

38% Cooler Operation That’s As Quiet As A Pin Drop
To make sure multimedia professionals and gaming enthusiasts would experience maximum performance potential, VisionTek created the CryoVenom R9 290 graphics card. By utilizing a custom designed water block and backplate solution, the CryoVenom R9 290 can run up to 38% cooler (51°C) while being overclocked up to 24% (1.1GHz) all while registering under 10dB1 of noise, which is the sound level of a pin drop.

Overclock Certified and "Custom Shop" Built
To assure stable overclocked performance, the FurMark GPU stress utility is employed to put a 100% load on each CryoVenom R9 290’s GPU for an extended time period to determine the optimum overclock setting with a 5% safe "headroom". Those unique, certified overclock specifications are entered onto a build sheet that is personally signed by the VisionTek’s "Custom Shop" team member that built and tested the CryoVenom card. Each card is then extensively pressure tested to ensure leak-free cooling reliability.

Better Value Than DIY
Even seasoned, hands-on system builders will find the certified ready-to-run3 and fully warrantied CryoVenom R9 290 can save over $100, time, and stress compared to creating a comparable liquid cooled non-warrantied solution for a R9 290 graphics card:

"The CryoVenom R9 290 is truly a remarkable feat of creative product development that draws upon our two decades of graphics card development experience," said Mark Bilson, Executive Vice President of VisionTek. "It solves any speed and noise concerns, eliminates overclocking guesswork, sets a new standard in performance, and costs less than the previous fastest Radeon graphics card available. Then, add in that we back its reliability with a one year warranty and we hope our fans will recognize our commitment to their ultimate performance and user experience satisfaction."

Specifications, Pricing and Availability
The CryoVenom R9 290 is available for immediate ordering at $550 USD MSRP