This water block comes with multiple ports, allowing great versatility. The performance is one of the key elements of the design, which is why this block features a 30% larger fin area compared to other water blocks from the Vector family.

EK-Quantum Vector FE Special Edition water blocks are the recipients of the renowned iF Design Award. The award-winning design encases the block in a 20mm thick aluminum exoskeleton that forms a cradle to embed the cooling and lighting, revealing only the most beautiful elements to the user. The distinctive PCB shape of the Founders Edition card posed a design challenge, but a terminal between the two prongs of the PCB solved the issue. The result is a unique and unprecedented GPU water block.

The water block is purpose-designed with an extremely thick copper base for high-performance, allowing it to clear all components of the densely-packed PCB and adding more heat removal capacity in the process. The cooling engine used in this water block is the largest EK has built to date, having roughly 30% more surface area than the rest of the existing Vector series water blocks.

A Testament To the Build Quality

Like the Magnitude CPU water block, the entirety of this water block is CNC-machined without mass-production techniques. The block’s base is milled out of a 12mm thick piece of pure electrolytic copper sourced from Europe, which is then nickel-plated, while its top is CNC-machined out of a glass-like cast Acrylic material.

The external enclosure, which is not in any contact with the coolant, is machined out of a 20mm thick solid piece of aluminum, which is afterward anodized into black or gray color, depending on the model. The included single-slot I/O shield is supplied with special screws for attaching it to the aluminum enclosure in order to even out the entire water block’s weight distribution. The watertight sealing is ensured by high-quality EPDM O-rings, while brass standoffs are already pre-installed and allow for a safe and easy installation procedure.

The water block is delivered with a terminal featuring 6 G1/4″ ports. Two direct G1/4″ ports on the side, and four G1/4″ ports going through it – two from the top, and two from the bottom. The new design allows terminals to be directly attached to the copper cold plate of the GPU water block, making it more rigid and reducing the chances of damage.  The terminal is neatly located between two prongs on the PCB, utilizing minimal space. This kind of design allows for incredible versatility, especially for Small Form Factor builds, and of course, more interesting aesthetics.

This Special Edition Vector water block directly cools the GPU, VRAM, and the VRM (voltage regulation module) as cooling liquid is channeled right over these critical areas. The water block is in contact with MOSFETs and chokes to maximize cooling and minimize the chances of unwanted coil whine. The flow paths are also optimized to reduce hydrodynamic instabilities and vortexing (dead spots) inside of them.

The integrated Open Split-Flow cooling engine design proved to be a superior solution for GPU water blocks. It is characterized by low hydraulic flow restriction, meaning it can be used with weaker water pumps or pumps running on low-speed settings and still achieve top performance.

The jet plate and fin structure geometry are optimized to provide even flow distribution with minimal losses and optimal performance when used in any given coolant flow orientation.  Fin array is populated by 31 microfins with 0.6mm wide microchannels that provide exceptional cooling performance without unnecessary flow restrictions or clogging hazards.

This water block comes with an included backplate that makes sure the entire graphics card is enclosed and not at all visible. It also provides additional passive cooling for the GPU core and backside of the printed circuit board VRM section. Due to the small size of the card and the block itself, the ribbed backplate boasts an increased surface area for additional passive cooling power. It’s CNC-machined out of aluminum, which is either black-anodized or nickel-plated, depending on the version of the water block. 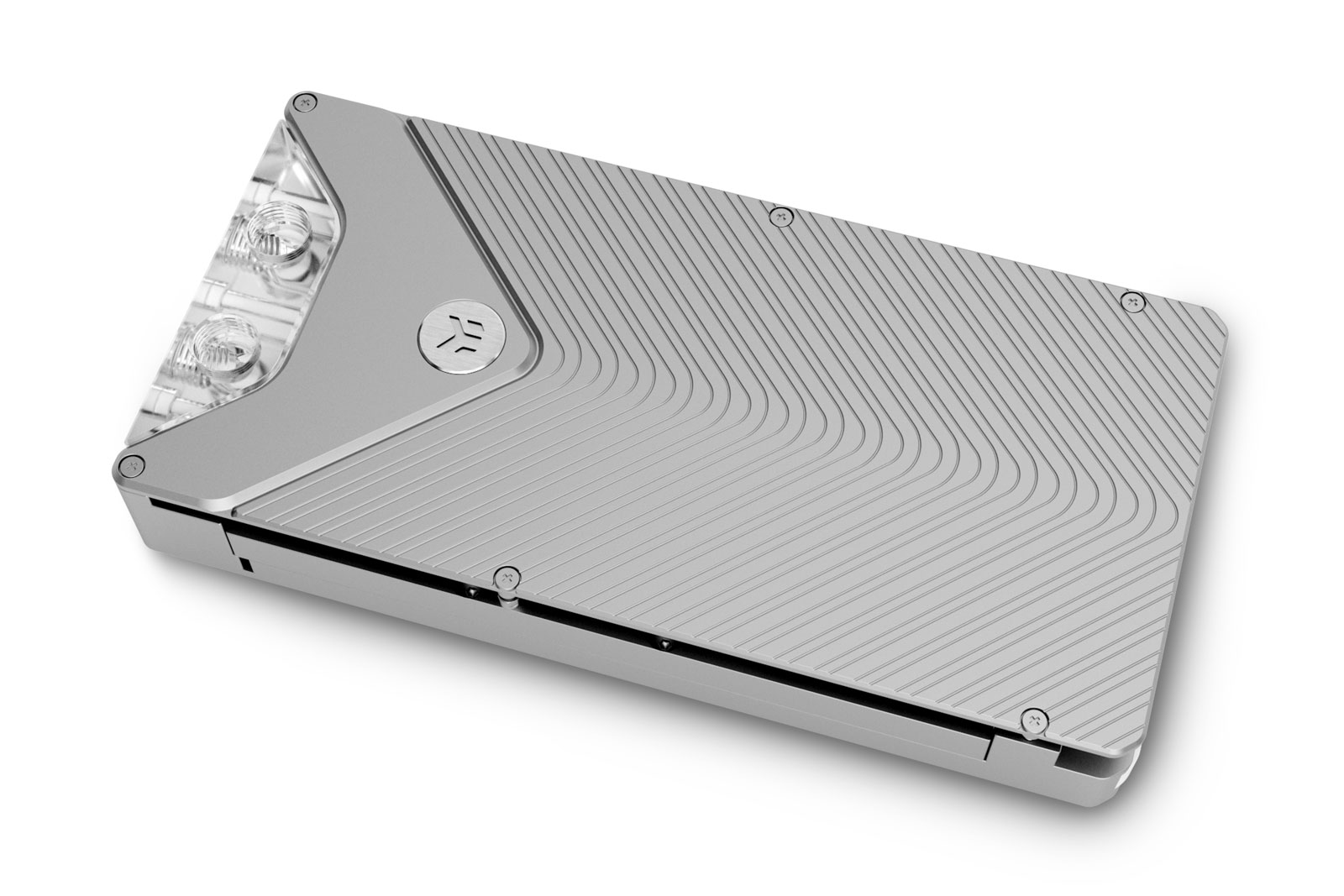 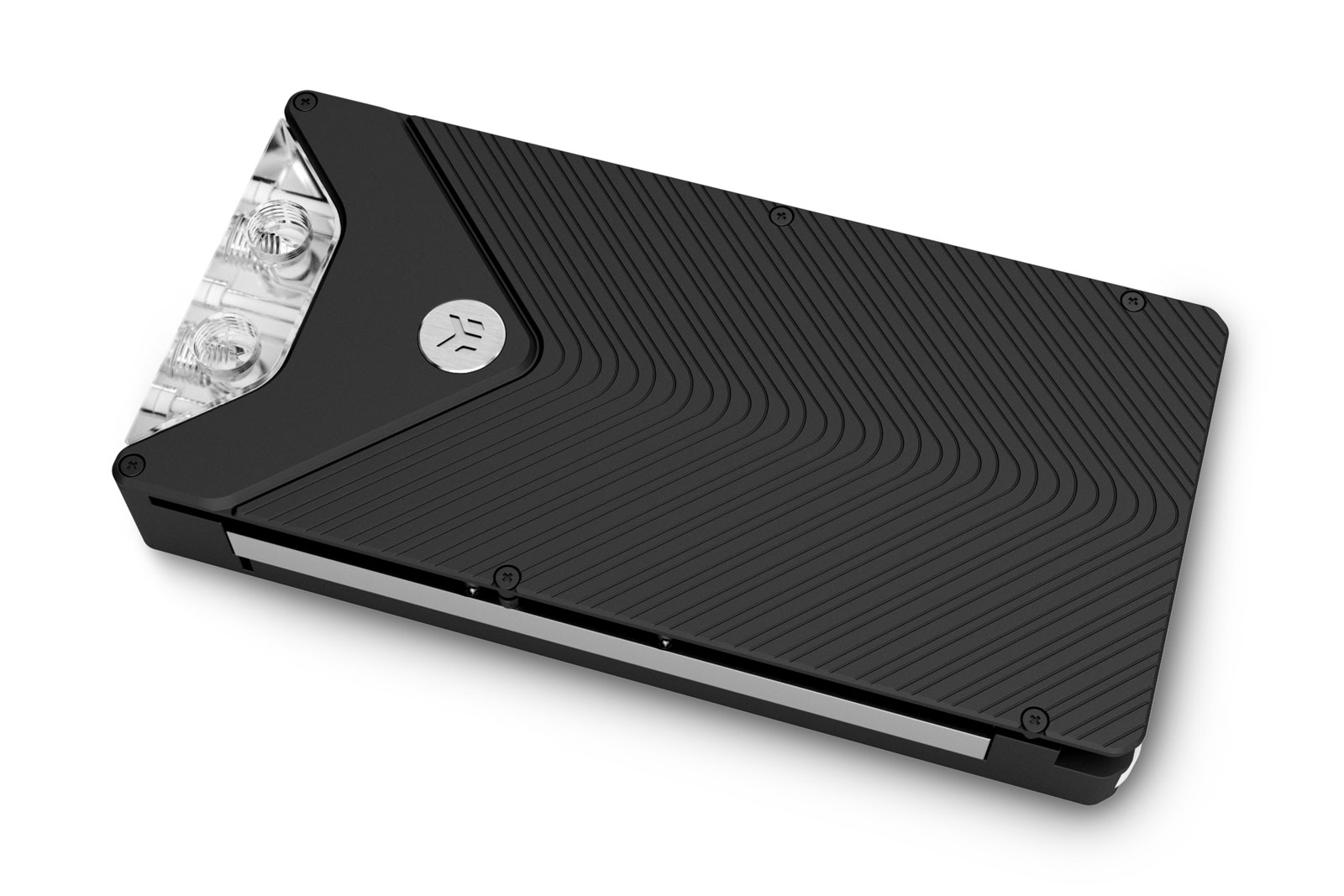 This water block boasts a whopping 20 individually addressable D-RGB LEDs that illuminate both the water block’s interior and the terminal itself. It is compatible with all popular RGB Sync technologies from major motherboard manufacturers. The arrow marking on the 3-pin D-RGB LED connector is to be aligned with the +5V marking on the D-RGB (addressable) motherboard header.

The EK-Quantum Vector FE RTX 3070 Ti D-RGB full-cover water blocks are made and assembled in Slovenia, Europe, and are available for pre-order through the EK Webshop and dedicated reseller network. The first batch of water blocks is expected to ship out in late February 2022.

We will be updating the pre-order note in the webshop, depending on how many orders are made, so be fast if you want to be in the first batch. Since the pre-order message in the webshop will be changing, please rely only on the estimated date you will receive once you place your order. In the table below, you can see the manufacturer suggested retail price (MSRP).