EK®, the premium liquid cooling gear manufacturer based in Europe, is releasing a new Quantum Line of genuine D5 pump  based combo units. These units are a revolution and an upgrade of the market-proven design used in the old EK-XRES Revo generation of pump-res combos since the new units have twice as much ports. EK-Quantum products come with sophisticated 5V addressable D-RGB LEDs which can be controlled through your motherboard RGB control software or the upcoming EK-Connect controller unit. 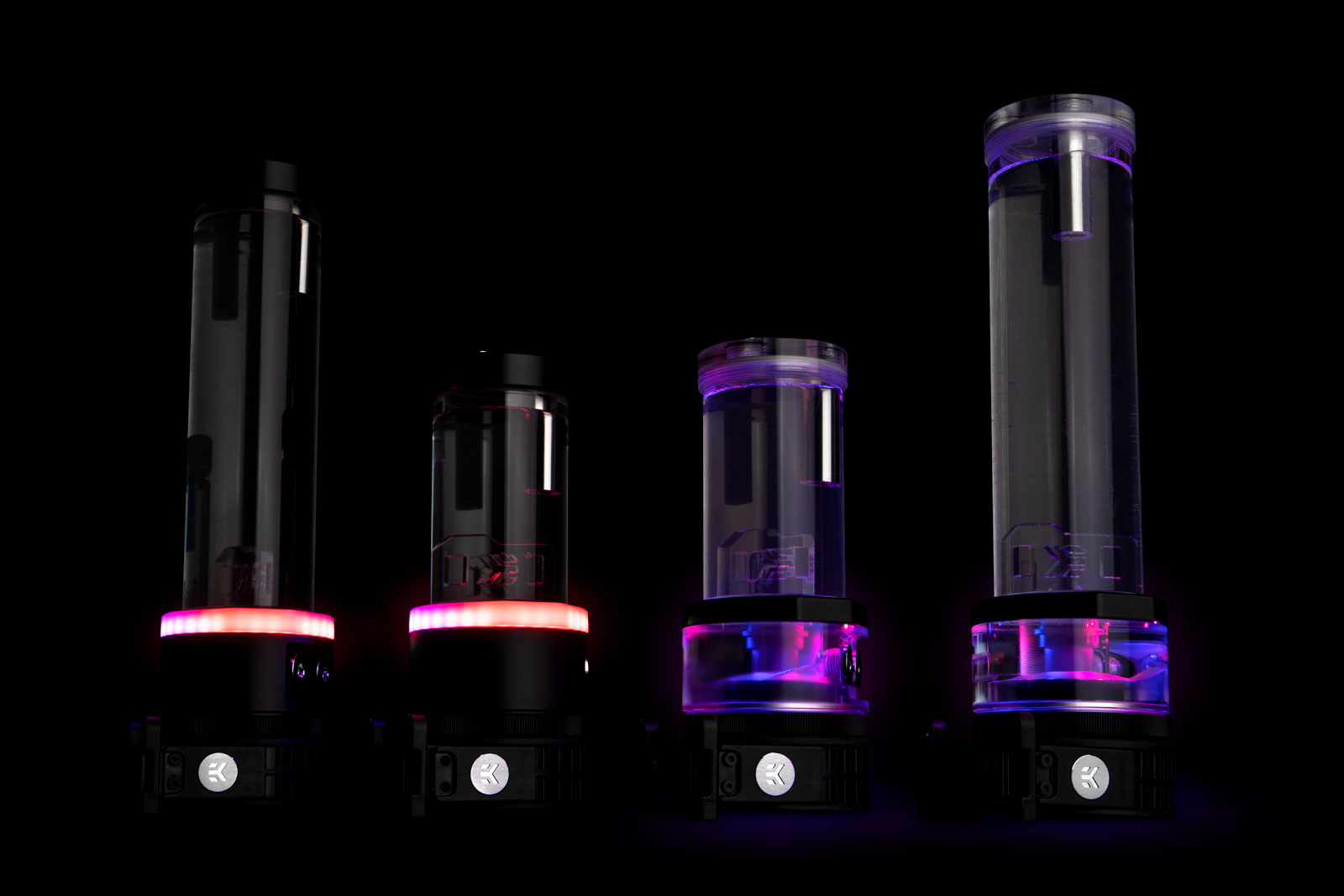 The most popular cylindrical pump-res combo on the market is redesigned, upgraded and is better in every way. The top is now featuring three G1/4″ ports, one of which has a pre-installed nickel-plated brass internal tube which helps to prevent the splashing of the coolant inside the reservoir if the top is to be used as an inlet. This reduces the chances of air being sucked in by the pump and foaming of the coolant as well. Any of these ports can also use used for filling the system or adding additional upcoming accessories (thermal probes, LEDs, etc.)

Another three industry-standard G1/4″ ports are available in the bottom combo housing. The upgrade compared to the previous combo unit is the 3rd available side port usable as either an optional inlet or a drain port.

The tube itself remains unchanged, with a diameter of 60mm. This means that they remain compatible with the previous generation of EK cylindrical reservoir tubes. The anti-cyclone insert is pre-attached, modernized and made more discrete.

The EK-Quantum Kinetic TBE D5 tubular pump and reservoir combo units are available in a total of four versions. Two height variants marked with 200 and 300 which represents the total height of the unit in millimeters, and two material choices for each of the size variants. 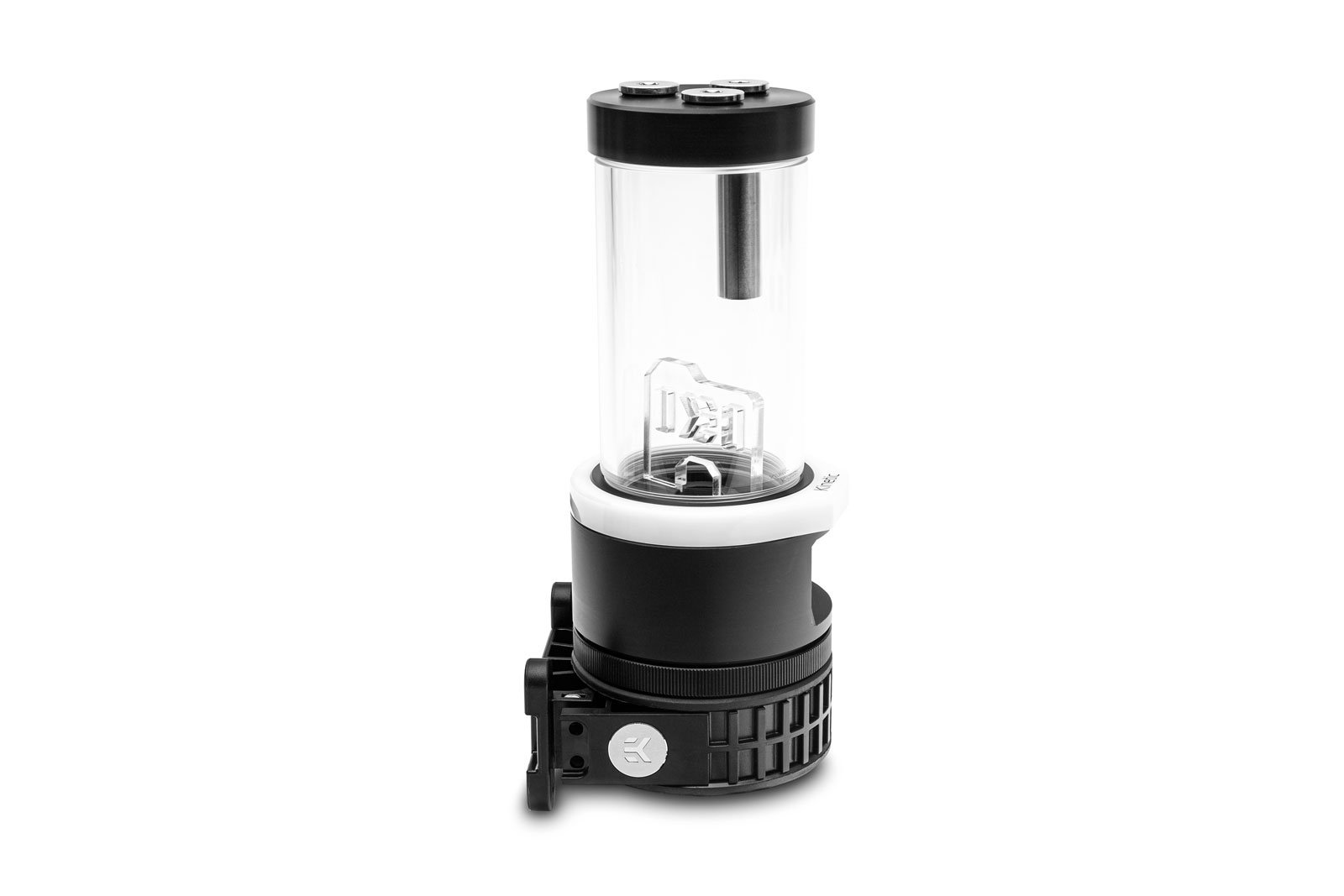 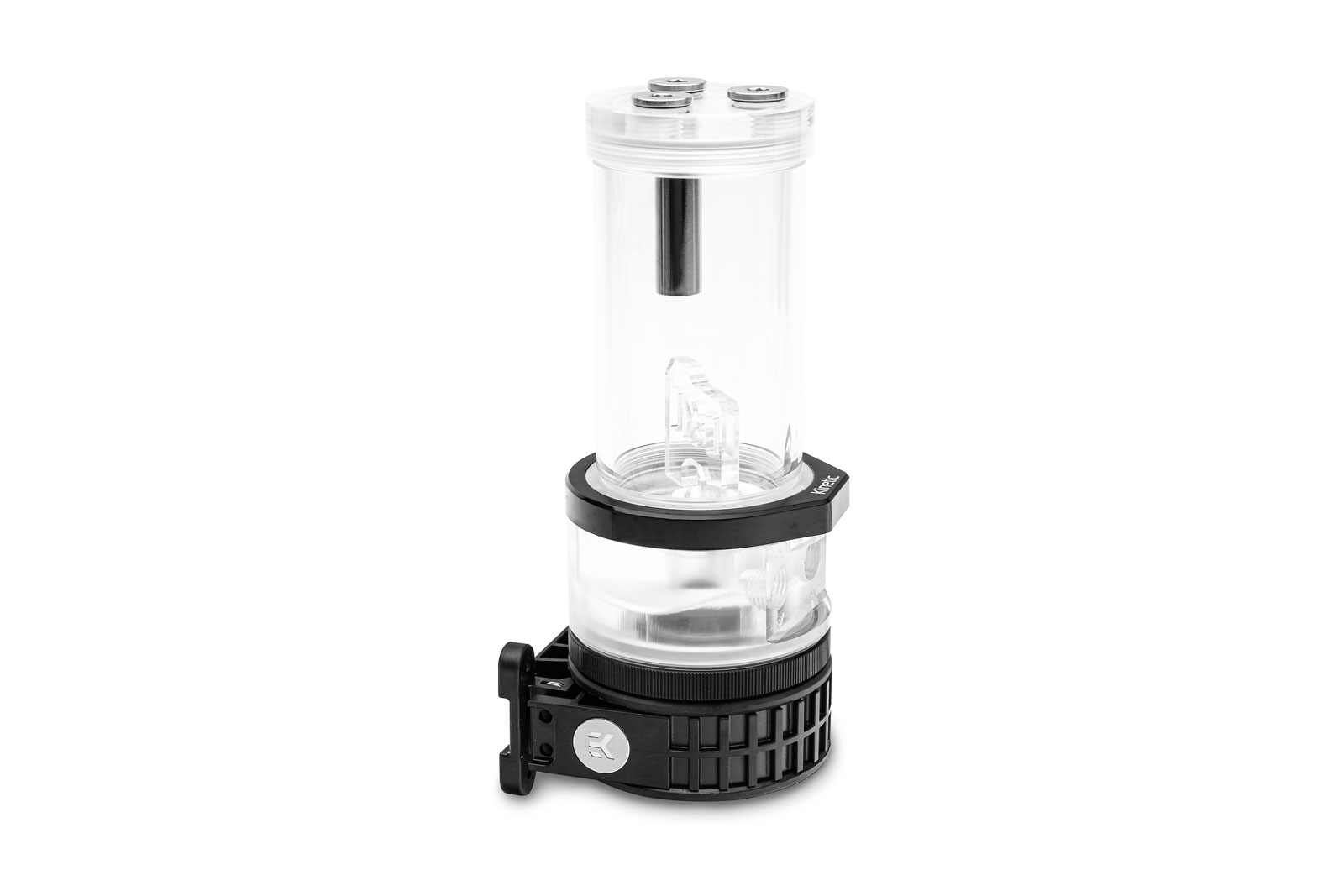 EK-Quantum Kinetic TBE 200 D5 PWM D-RGB Acetal on the left, and Plexi variant on the right 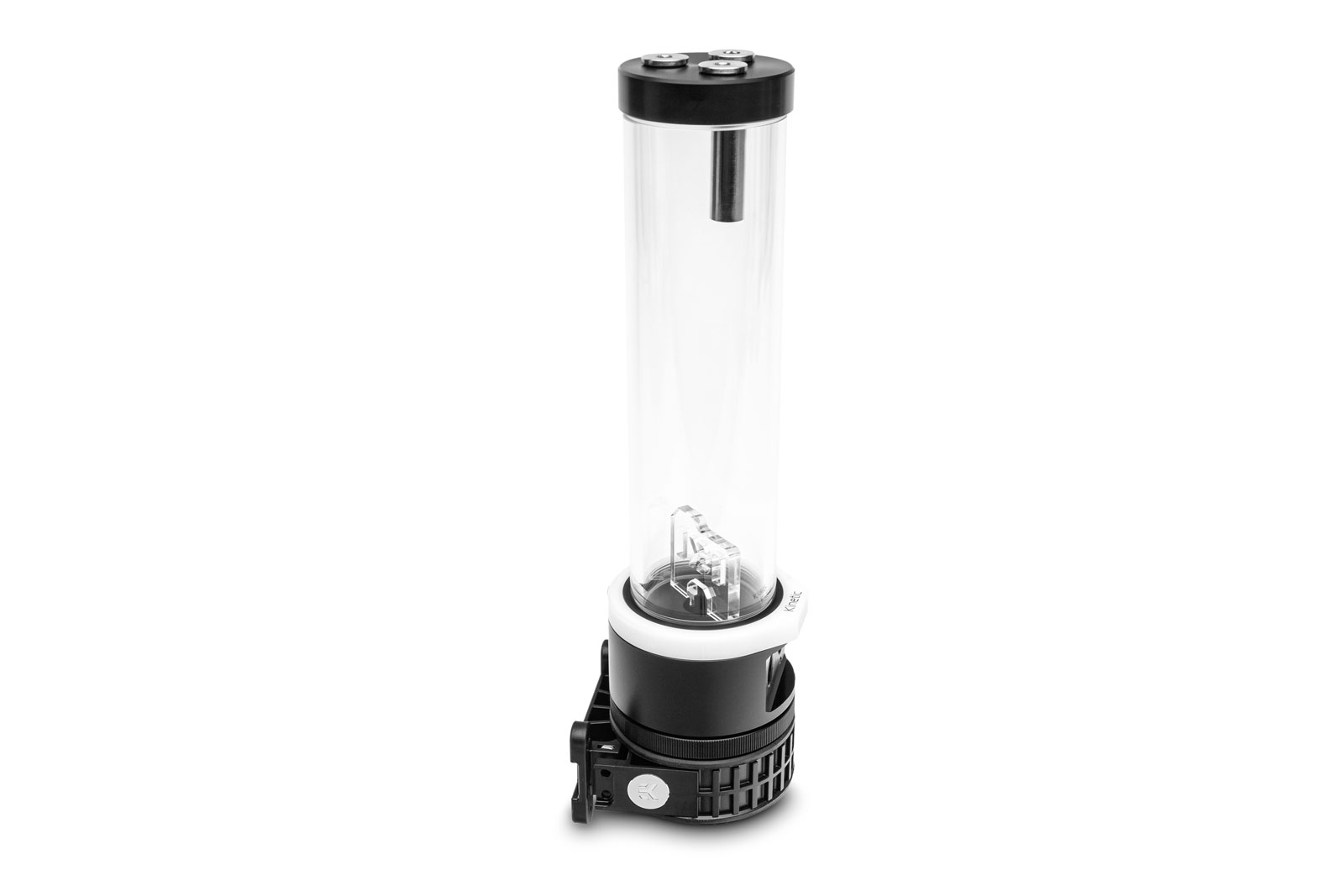 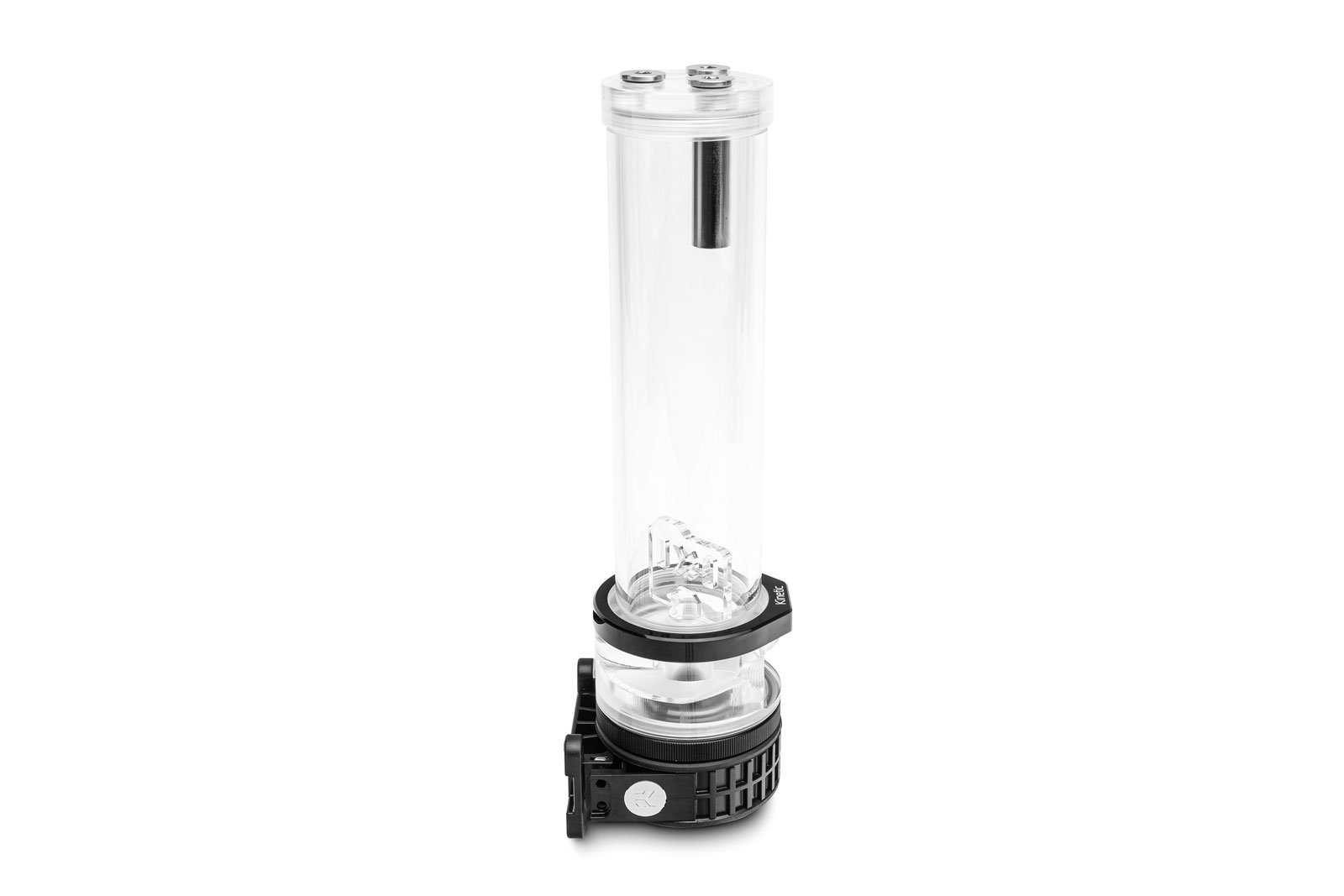 EK-Quantum Kinetic TBE 300 D5 PWM D-RGB Acetal on the left, and Plexi variant on the right

The combo top piece houses an aesthetic ring with the Quantum stick-out that serves as a diffuser for the addressable D-RGB LED underneath.

The EK-Quantum Kinetic TBE comes in both black POM acetal and plexi variants, both having addressable D-RGB implementation inside the distinctive Quantum aesthetic ring. With the plexi versions of the combo units, the black aesthetic ring acts as a cover, completely hiding all the LEDs, while with the acetal version the white ring acts as a subtle diffuser.

A digital (addressable) 3-pin 5V D-RGB LED strip is installed in these combo units which connects to the motherboard’s 3-pin LED header or it can be connected to any other supported 5V 3-pin addressable D-RGB LED controller. This product is compatible with all major motherboard manufacturer’s D-RGB control software. The arrow marking on the 3-pin LED connector is to be aligned with the +5V marking on the D-RGB header. 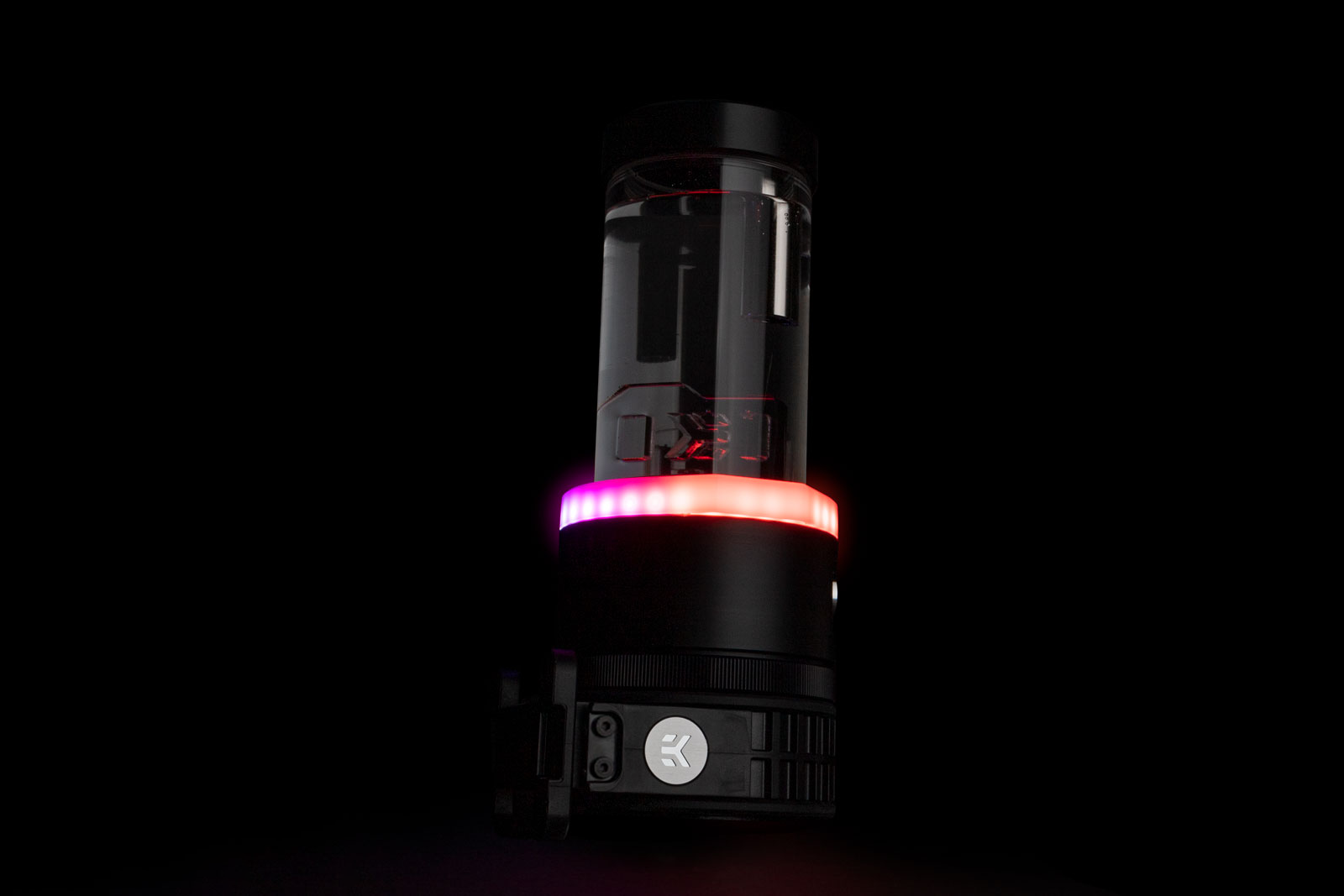 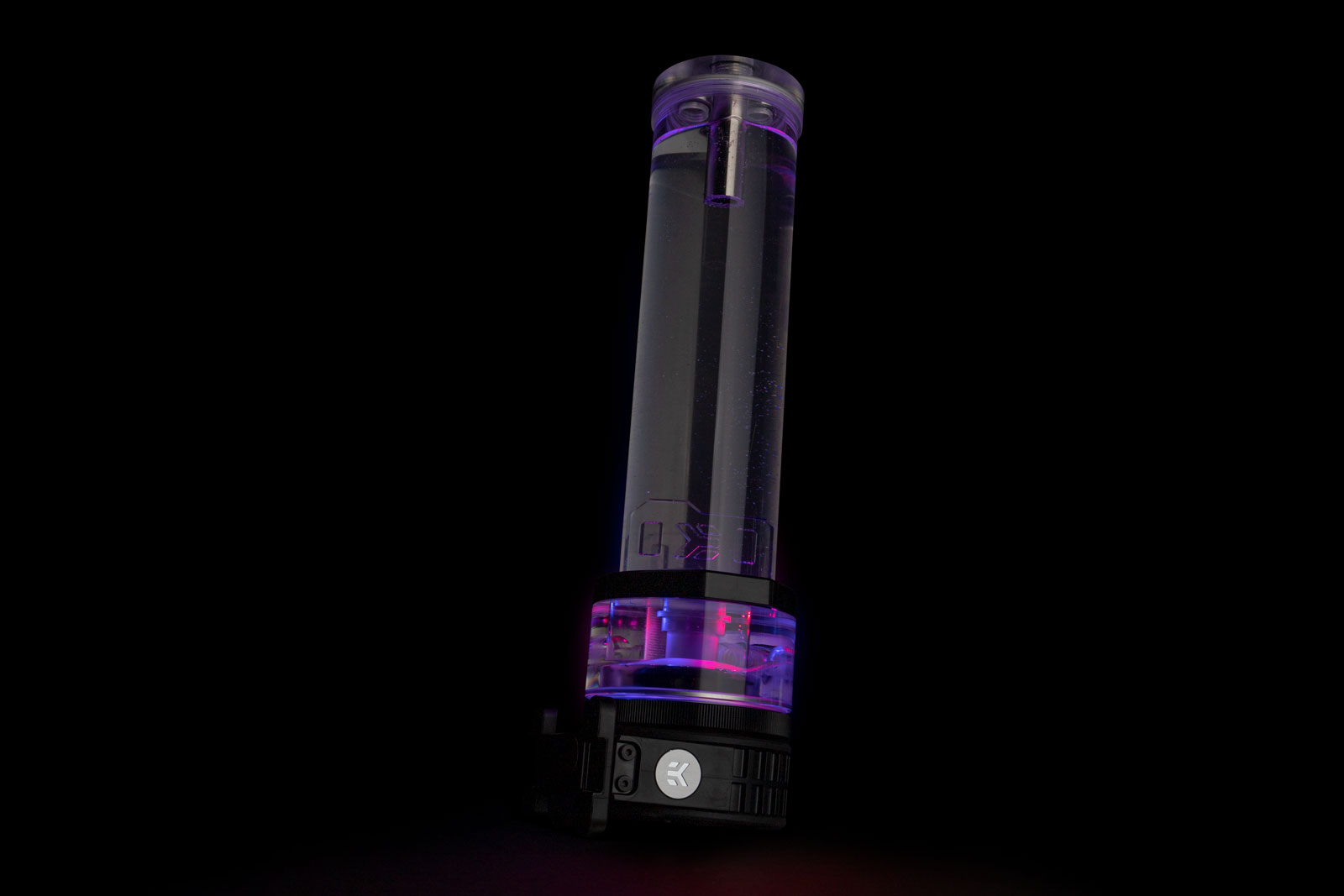 EK-Quantum Kinetic TBE D5 PWM D-RGB Acetal on the left, and Plexi variant on the right

EK-Quantum Kinetic TBE pump-reservoir combos are made in Slovenia, Europe and are available for purchase through the EK Webshop and Partner Reseller Network. In the table below you can see the manufacturer suggested retail price (MSRP) with VAT included.