EK®, premium liquid cooling gear manufacturer based in Europe, is launching a new, addressable D-RGB version of EK-Vector Trio high-performance water blocks specially designed for MSI Gaming Trio GeForce® RTX™ 2080 and 2080 Ti graphics cards. The block also features a D-RGB lit aesthetic cover over the block Terminal which is designed to showcase the graphics card model via addressable LEDs, visible from the side.

The EK-Quantum Vector Trio RTX D-RGB water blocks are specially designed for multiple MSI Trio GeForce RTX Turing based graphics cards. These water blocks use the signature EK single slot slim look and cover the entire PCB length. This sophisticated cooling solution will transform your powerful MSI graphics card into a minimalistic, elegant piece of hardware with accented D-RGB (addressable) LED lighting. The block also features a unique aesthetic cover over the block Terminal which is designed to showcase the graphics card model via addressable LEDs, visible from the side.

The water block comes in two different versions tailor-made for MSI Gaming Trio 2080 and 2080 Ti cards including the Gaming X variants which are factory overclocked. Each of them directly cools the GPU, VRAM and the VRM (voltage regulation module) as cooling liquid is channeled directly over these critical areas. This allows the graphics card to remain stable at high overclocks, intensive workloads and also enables it to run at its maximum Boost Clock. Ultimately, you can enjoy gaming at the highest possible performance of your graphics card, stutter-free in a low noise environment. 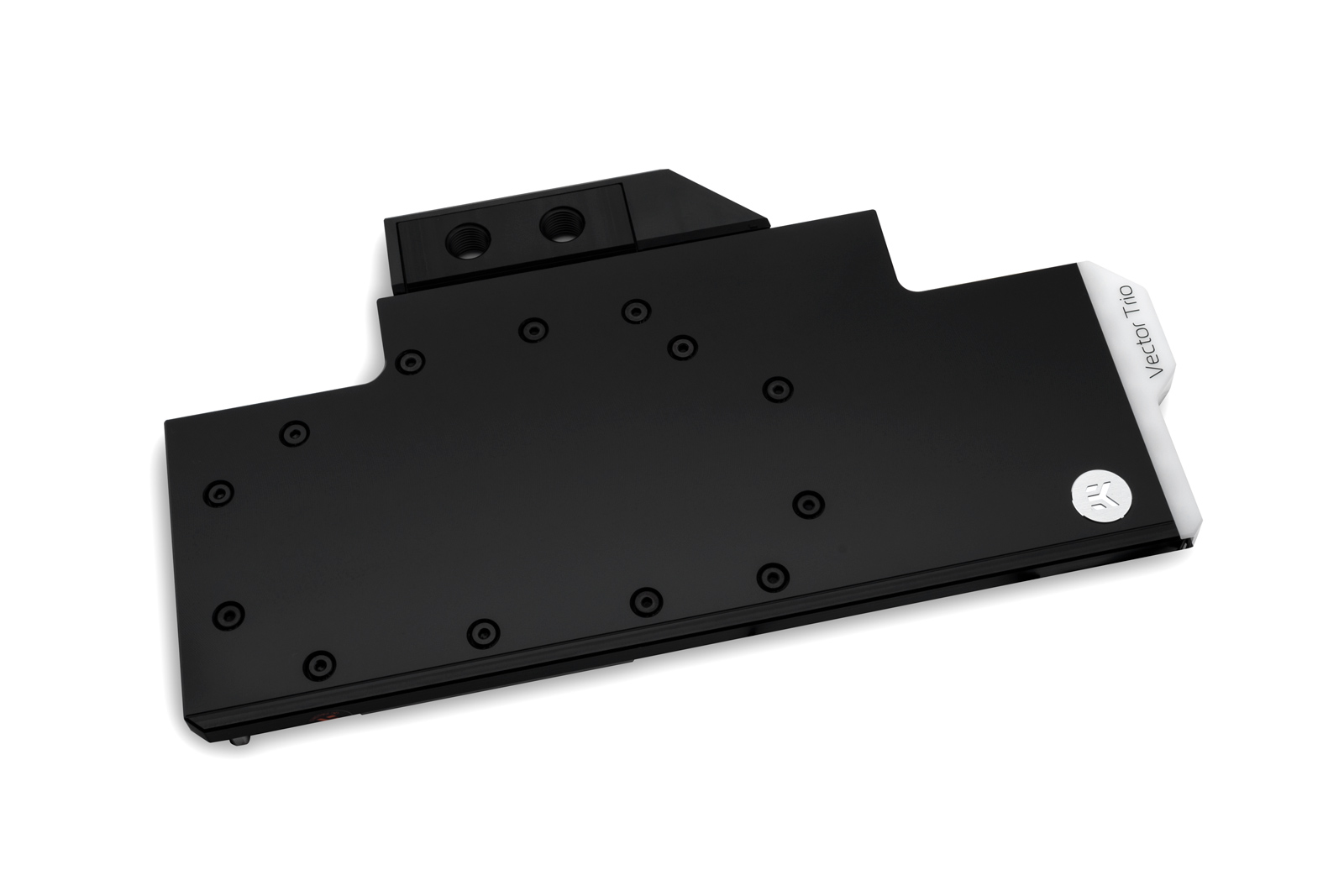 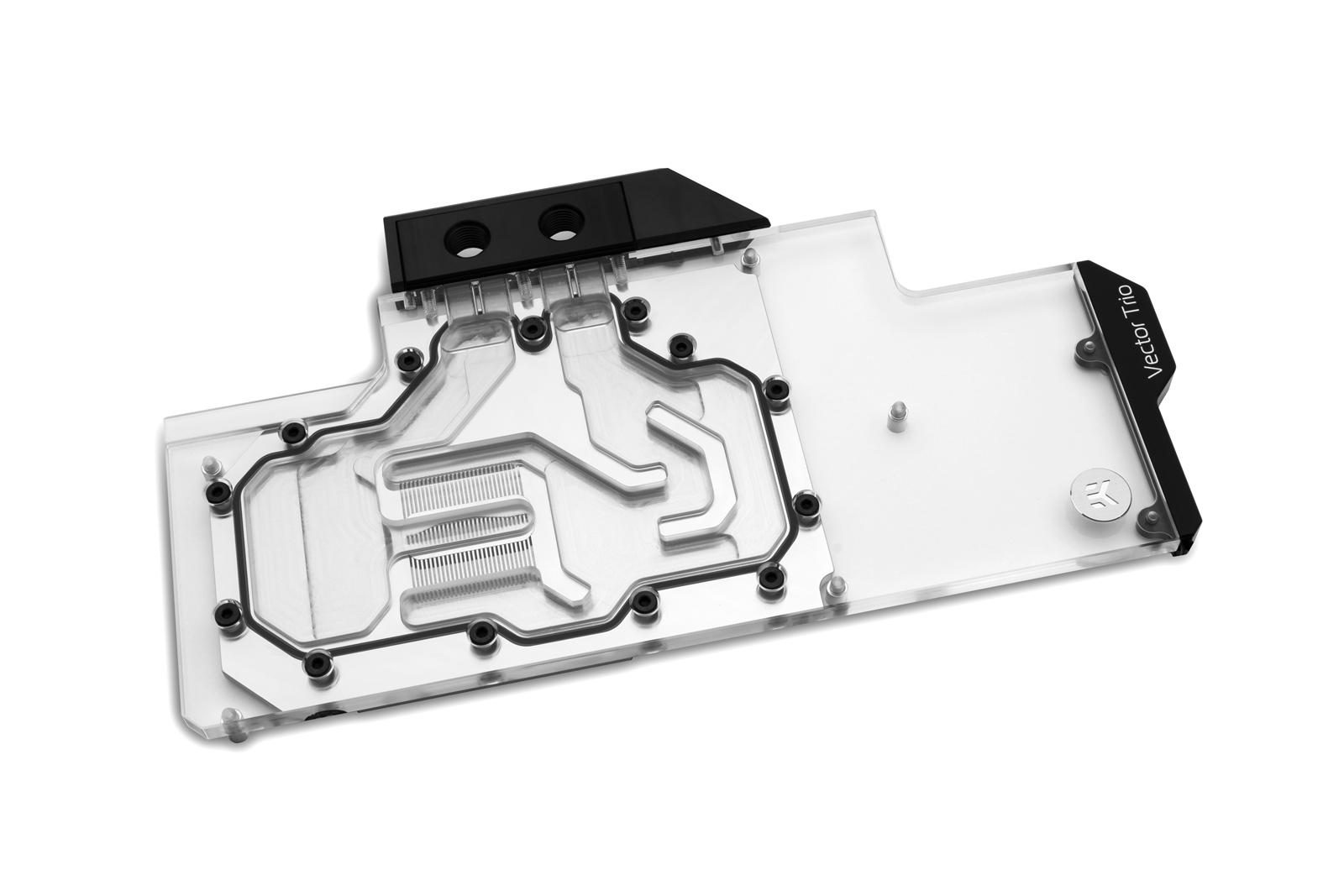 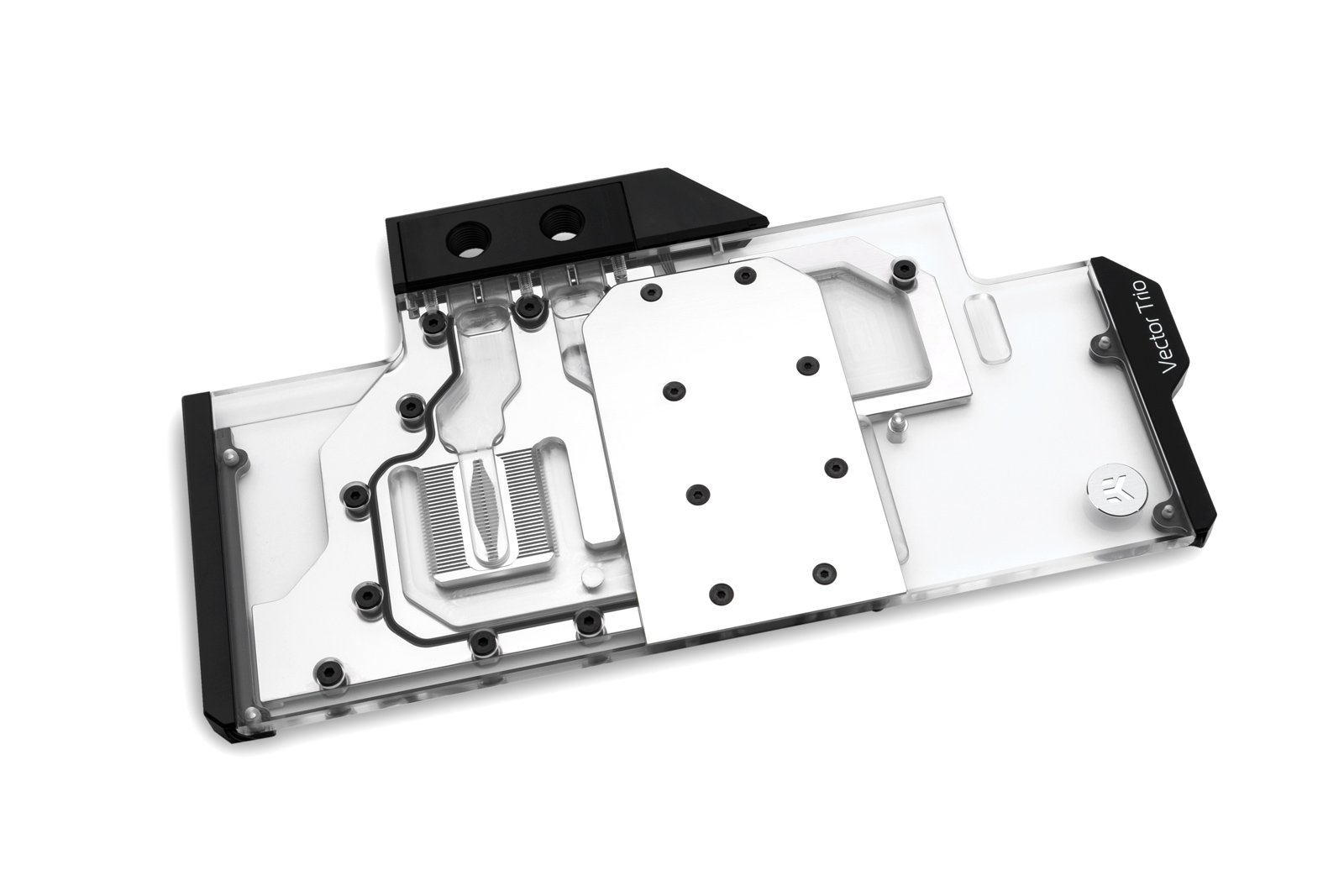 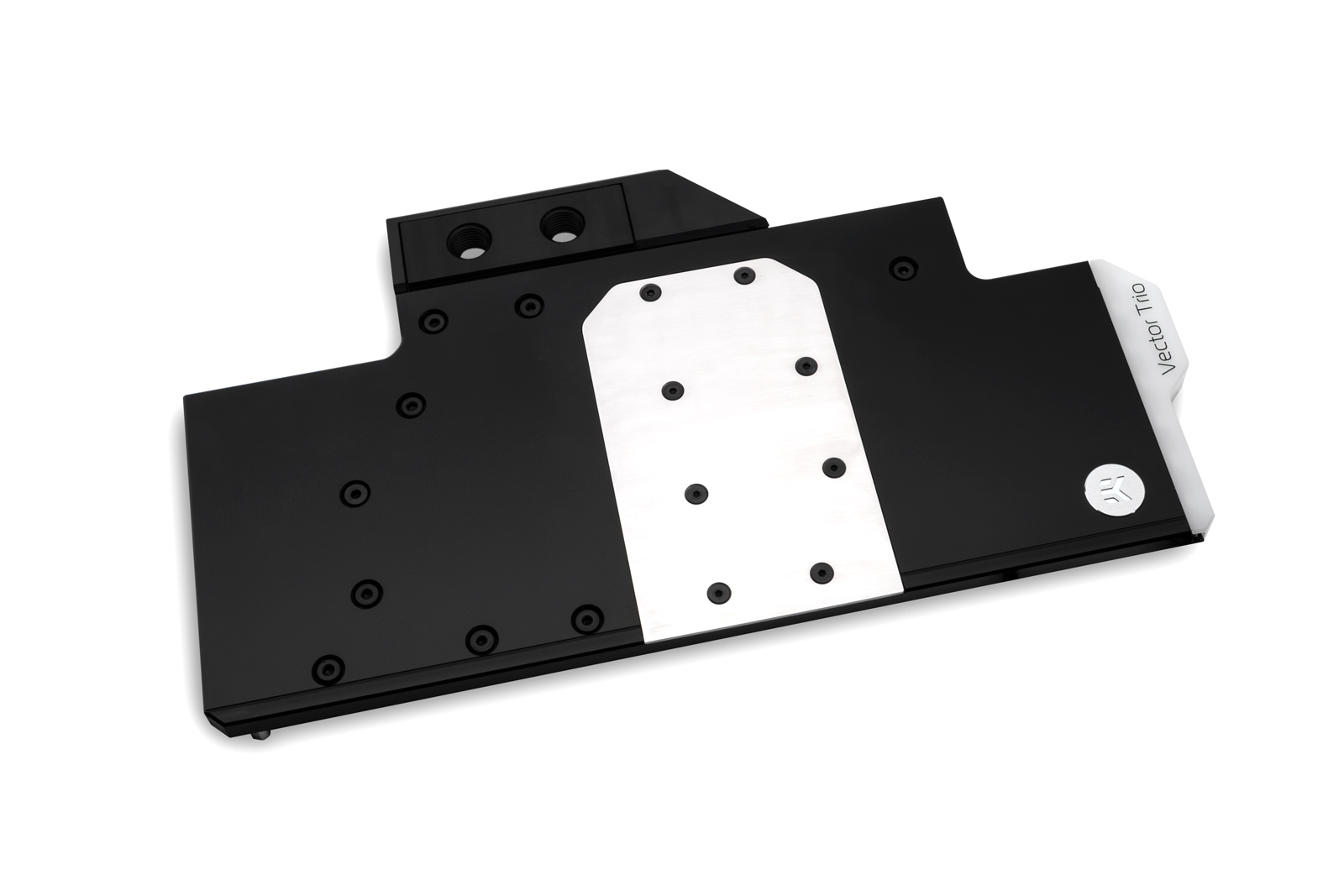 The base of the block is CNC machined out of nickel-plated electrolytic copper while the top is CNC machined out of high-quality acrylic material or black POM acetal, depending on your version of choice. Sealing is ensured by high-quality EPDM O-rings. The brass standoffs are already pre-installed and allow for a safe and easy installation procedure. It features four integrated LED sources, two located in the terminal cover and one LED strip on each end of the water block.

The newly developed water blocks feature the signature the Vector cooling engine that has a larger footprint compared to the previous generation of full cover water blocks. This results in a larger surface area for heat transfer which allows the increase of thermal performance of these water blocks.

EK recommends the purchase of a retention backplate which improves the aesthetics of your graphics cards, but also provides additional passive cooling to the GPU core and circuit board VRM section. The backplates for MSI Gaming X GeForce RTX 2080 and MSI Gaming X GeForce RTX 2080 Ti cards are to be available in either Nickel Plated or Black Anozided variants. The EK-Vector Trio RTX backplates that passively cool the graphics chip and VRM from the backside of the PCB. The EK-Vector Trio RTX backplates are made of high-quality Aluminum and come in nickeled and anodized black variants. The EK-Quantum Vector Trio RTX series water blocks are not compatible with factory backplates. 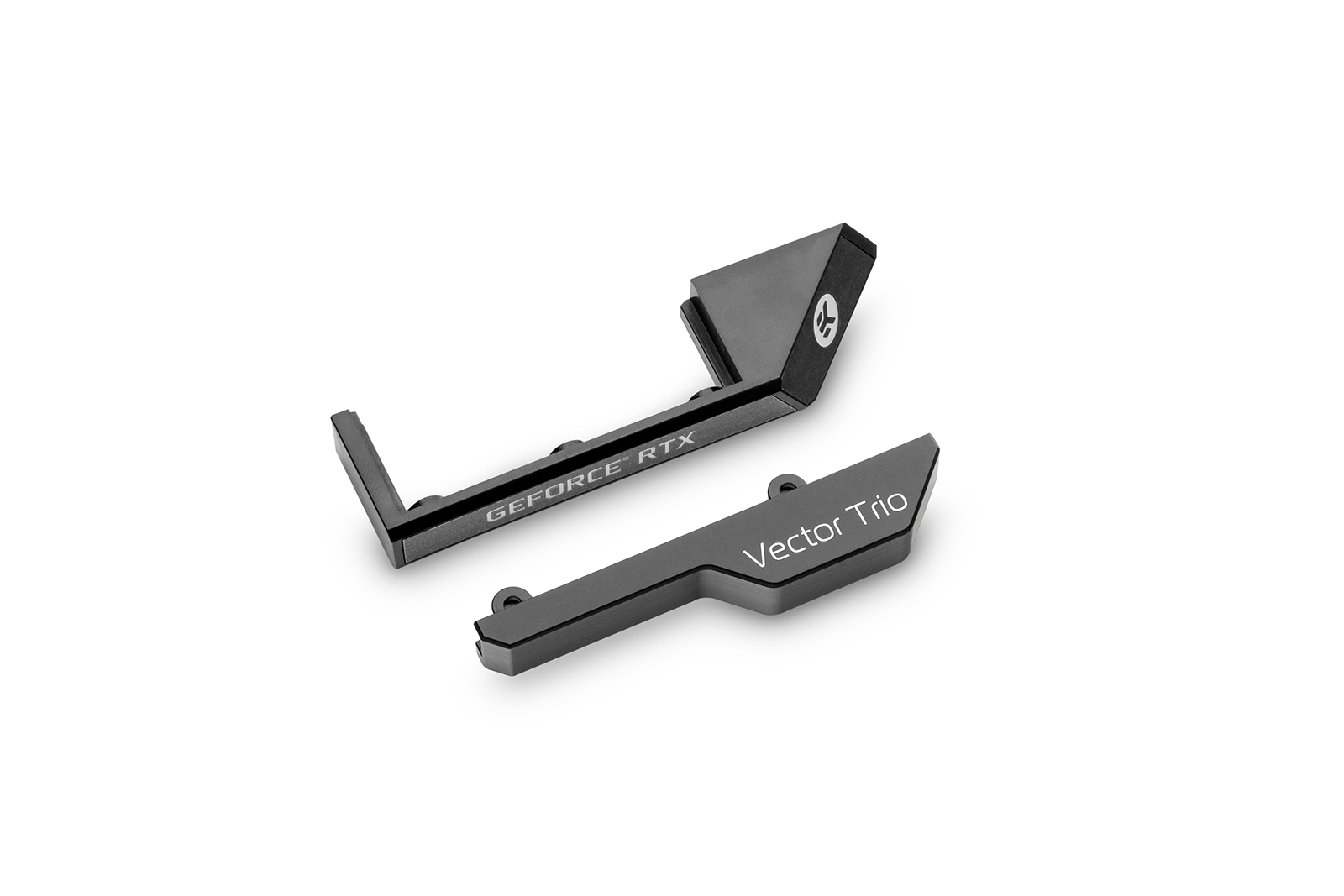 The EK-Quantum Vector Trio RTX series water blocks, upgrade kits and backplates are made in Slovenia, Europe and are available for order through EK Webshop and Partner Reseller Network.  In the table below you can see the manufacturer suggested retail price (MSRP) with VAT included.