So… Performance. Before we start reviewing the charts, we have to talk about how radiator performance is measured. The fundamental rule of radiator performance testing is to see how well the radiator cools the coolant. So for us, the most widespread way of describing radiator performance is by using W/10°C, or in other words, Watts per 10 Delta T (sometimes K is used instead of ΔT). This relation tells you how many watts the radiator can dissipate when the coolant temperature rises 10°C above the ambient temperature. If you are not familiar with the ΔT term, take a look at the previous “What is Delta T“ blog. But still, what does all this mean!? To make it easier to understand, let’s look at an example, a performance chart for an EK-CoolStream XE 240 radiator. 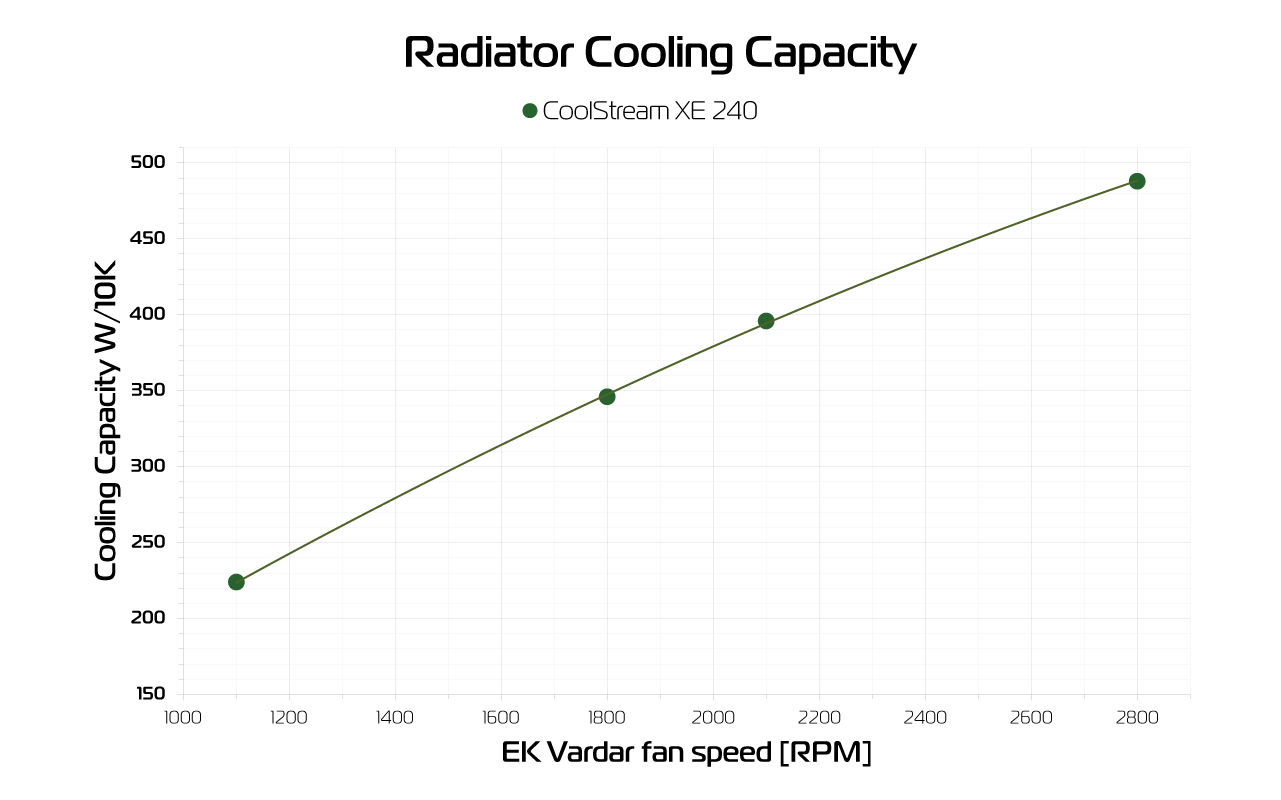 The chart shows that with two Vardar fans in a push setup, spinning at 1800 RPM, the EK-CoolStream XE 240 has a cooling power of 350W/10°C. This actually means that if the temperature of the liquid circulating in the radiator is 10°C higher than ambient temperature, the radiator can remove 350W of heat at that fan speed and that coolant flow. Therefore, if your room temperature is 25°C, and the liquid temperature is 35°C, the EK-CoolStream XE 240 can cool a high-end CPU and a high-end GPU. By looking at the chart, to cool and overclocked high-end GPU and CPU, that altogether dissipate around 450W, would require crazy fan speeds. But the „small“ 240mm radiator could still cool them, and at the same time, you would get decent CPU and GPU temperatures. We need to have in mind, that the ΔT is not something that we choose, it’s what we get as a consequence of hardware giving off heat and the cooling capability of the radiator. For our testing purposes and, charts a ΔT 10°C is used for representation. 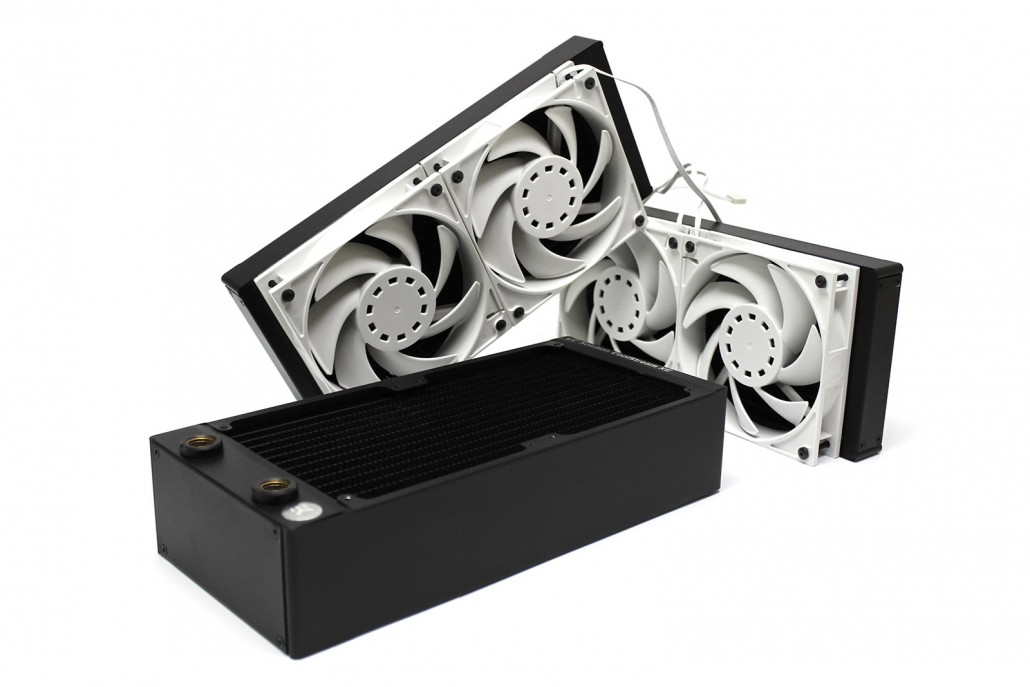 If you are having a hard time understanding this, imagine that the greater the difference between the ambient temperature and the liquid temperature, the more efficient the radiator gets. For the same reason, a fairly „small“ car radiator can cool the engine, because it has its liquid temperature at 90°C and the ambient temperature is mainly 25°C during the spring. If you are still having a hard time understanding all this, just know that the bigger the W/10°C number is, the better the cooling capacity of the radiator is. 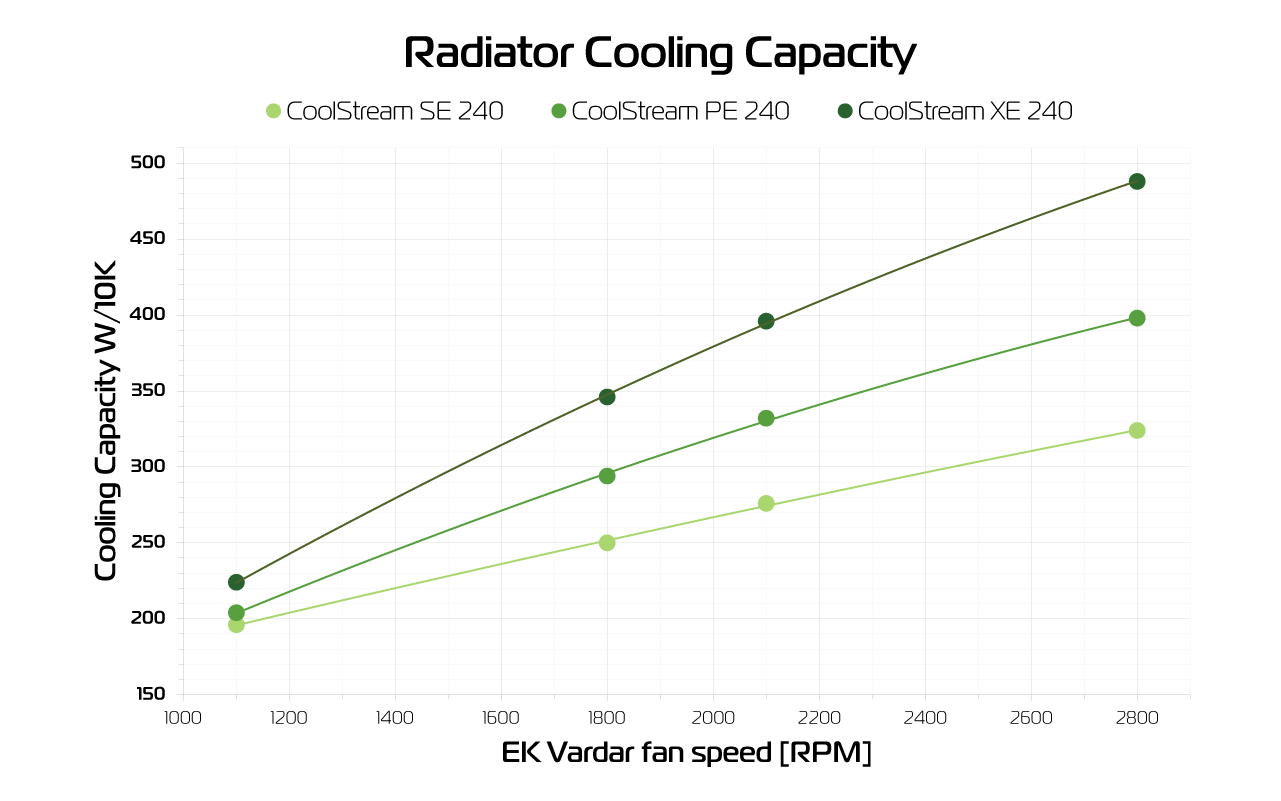 You can see how the three radiators relate to one another at various fan speeds. You can spot that the thicker the radiator is, the better it responds to faster fans, i.e. more airflow. Only with a slight change in the fan speed, the XE 240 radiator gains much more cooling power than the Slim 240 model. You can also spot that, at low fan speeds, all three radiators perform almost the same – within the 50W cooling capacity range. These results are for all EK-CoolStream SE, PE, and XE 240mm radiators but let’s see what happens when we compare these results to the 360mm models. 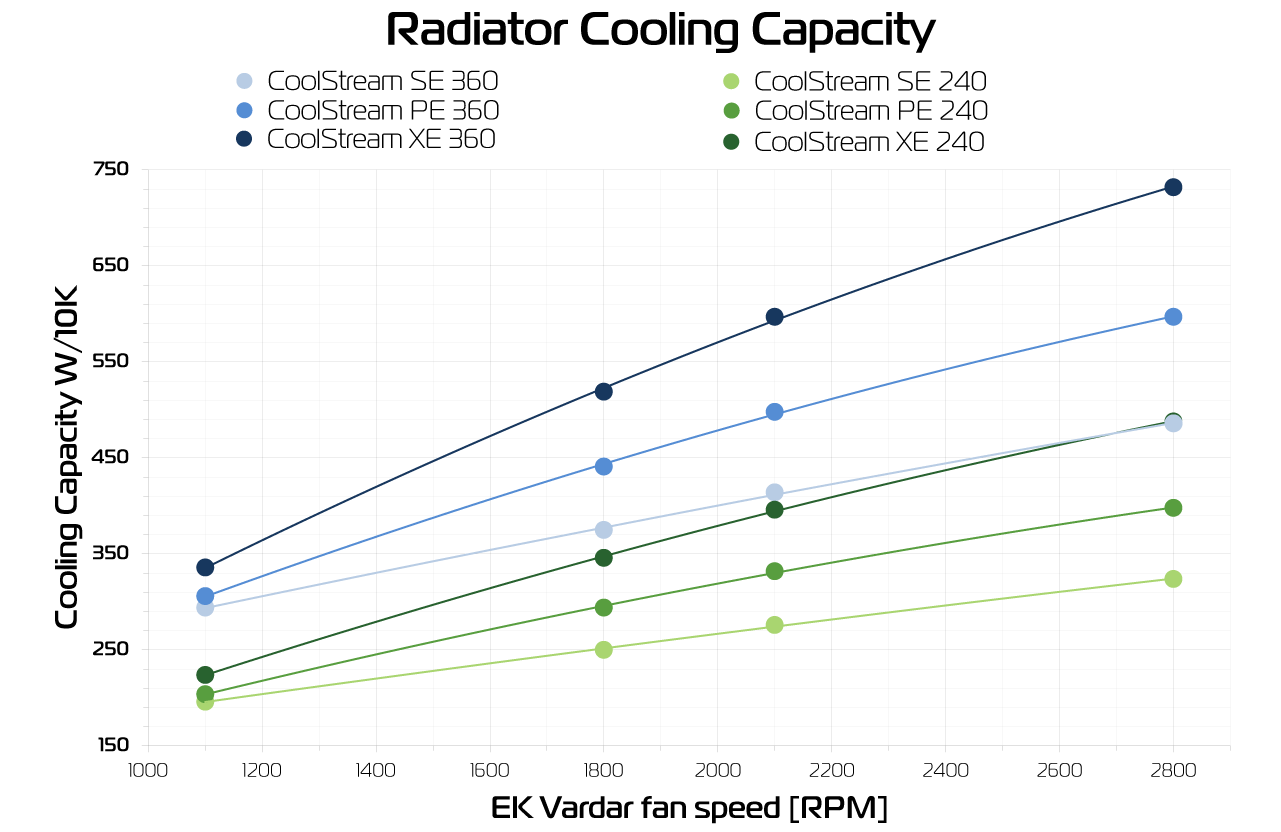 The jump in cooling performance from a 240 radiator to a 360mm one is more than evident. At a fairly low fan speeds, the SE 360 Slim radiator can cool 100W more that the 240mm Slim radiator. Again, we can see that the bigger and thicker the radiator is, the more it gains from the higher airflow. Hence, on this chart, the EK-CoolStream XE 360 leaves all the other radiators far behind.

When asking the question “Which radiator should I choose?“, you have to know what do you expect from it. Do you just want something more efficient than air cooling? Do you want silence? Do you want to overclock your hardware? Do you want a silent PC and overclocked stuff at the same time? Because a relatively small EK-CoolStream PE 240 radiator can cool your hardware far better than any air cooling. Going for a bigger radiator comes down to your personal needs, what components you are cooling, are you overclocking, do you want a silent PC, etc. 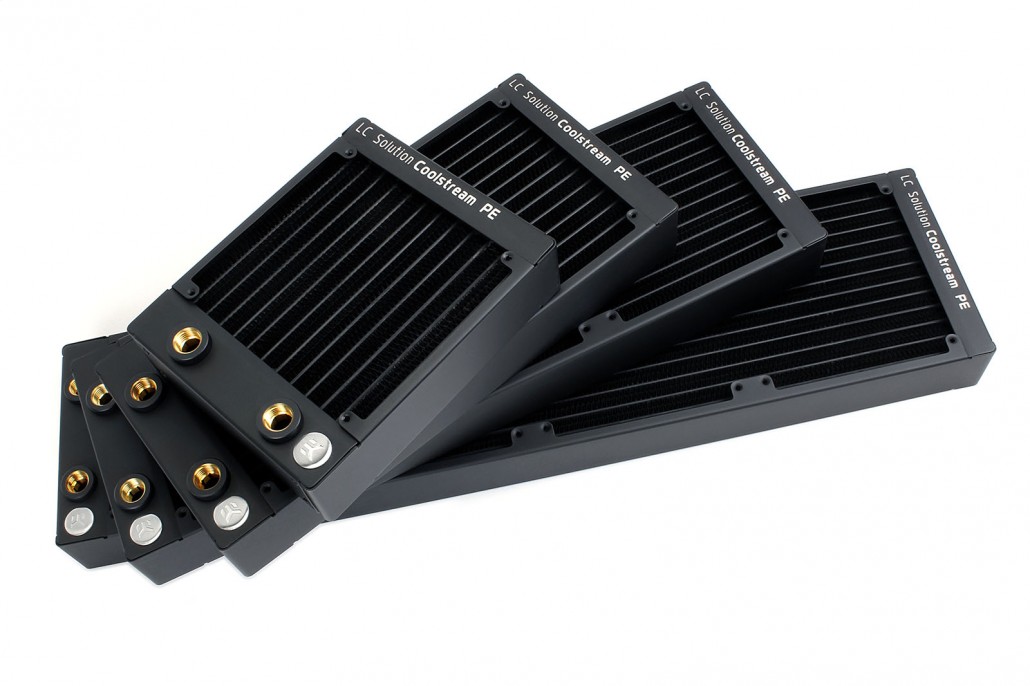 Radiators are by far the most demanding water cooling components when it comes to testing and measuring their performance accurately. For these reasons, we have used radiator test results that were conducted in a controlled test environment. The final results that you, the user, can get at home might differ from these charts because of variances in the pump flow rate, the type of fans used, the type of case and how well it is ventilated, the choice of water blocks, the quality of the thermal compound, etc. The number of variables is vast and the point of these charts is to show you how certain radiator sizes and models relate to each other.

We would wrap it up here and leave the rest for the episode 3. In our next blog post about radiators, we will be talking about surface size over thickness, or which one is better. Also, we are going to be talking about push, pull and push&pull setups.

Rhapsody in Purple by Desktop.bg

What is CLC and how to use it?
Scroll to top