EK®, the premium liquid cooling solutions manufacturer, is launching its most advanced fan series to date – the EK-Loop FPT 120 and 140. These high-static pressure radiator cooling fans are designed to completely replace the existing Vardar series across the entire product line. The EK-Loop FPT fans improve upon many aspects while focusing on excellent radiator performance. These fans feature an optimized and balanced performance-to-noise ratio on the wide fan operational range. 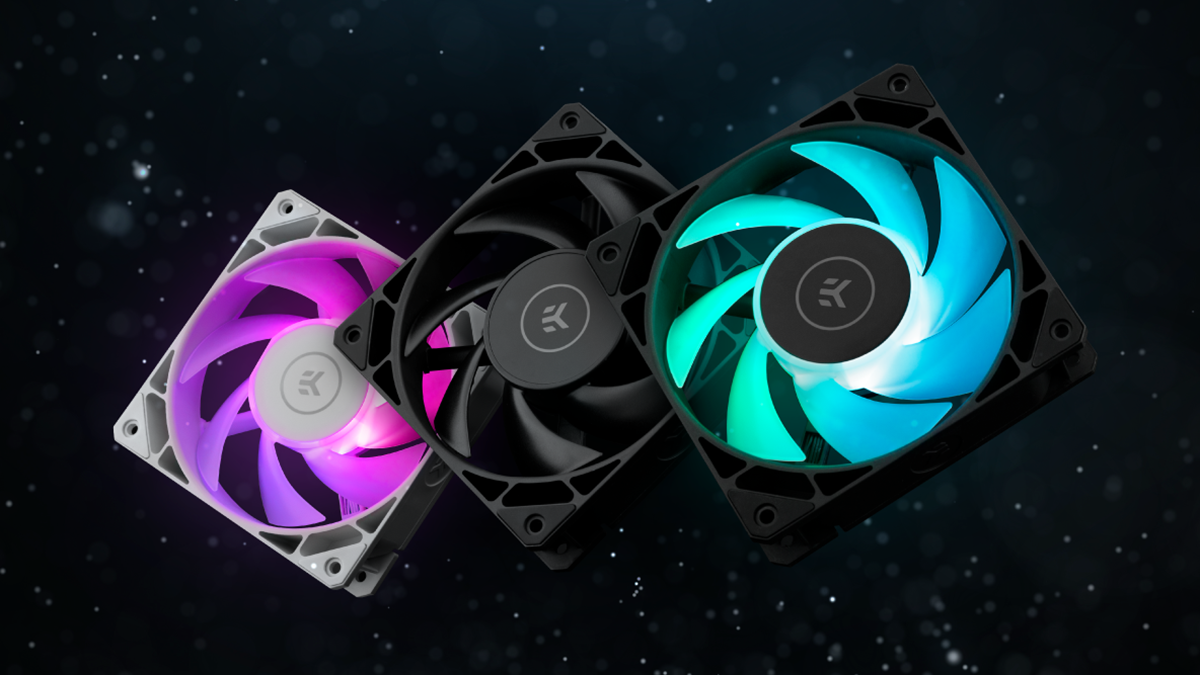 New FPT fans feature a full-frame design that doesn’t allow air to escape outside the frame, thus achieving better static pressure overall. The latest fan also allows daisy-chaining, ultimately reducing cable clutter and easing cable routing through the EK-OmniLink – an 8-pin Micro-Fit connector ecosystem. All the signal and power wiring for the PWM and D-RGB runs on a single cable and connector, which then utilizes a single cable to connect to the source. 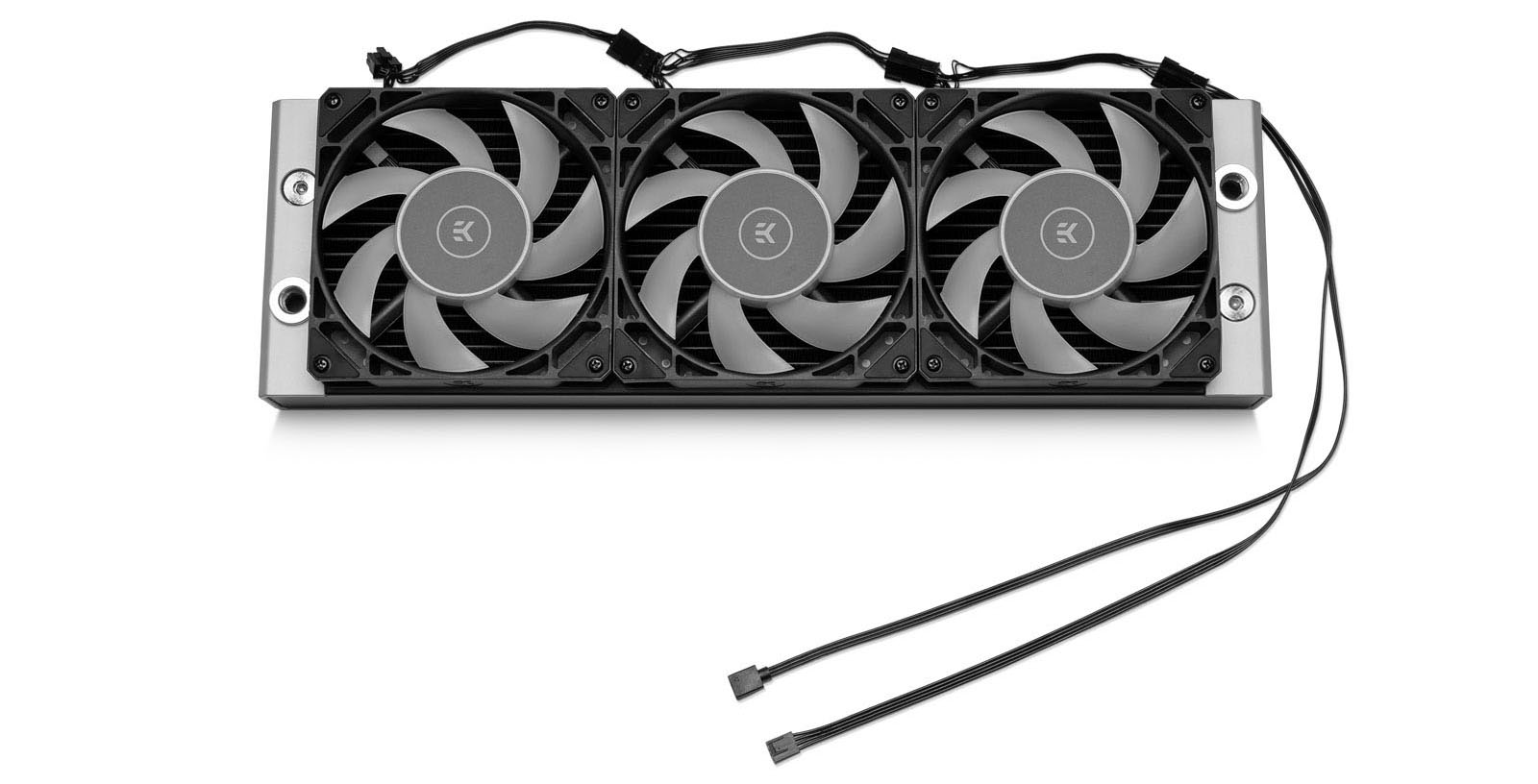 Most importantly, the EK-OmniLink ecosystem doesn’t require any special controllers since the connection ends in the standard motherboard connectors – a 4-pin PWM for the fan power and a 3-pin 5V D-RGB for the connectors. 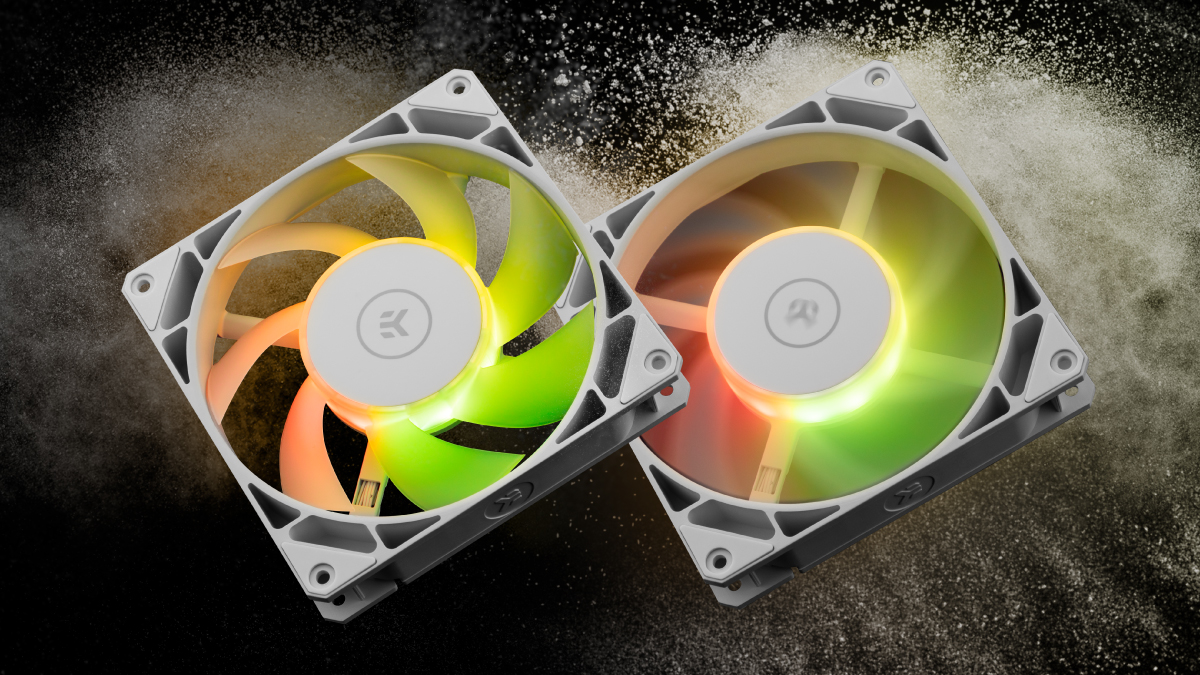 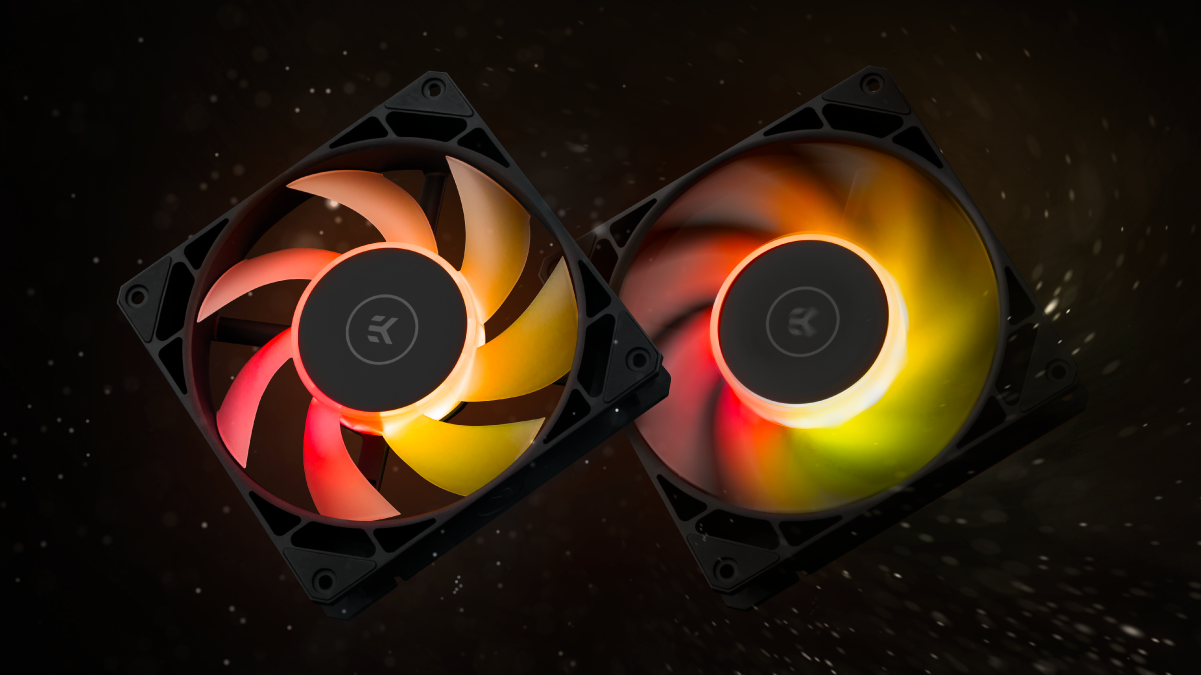 Full Pressure Technology (FPT) is a full-frame design that makes contact with the radiator, sealing it completely off and not allowing air to escape the frame and cause a loss of static air pressure. 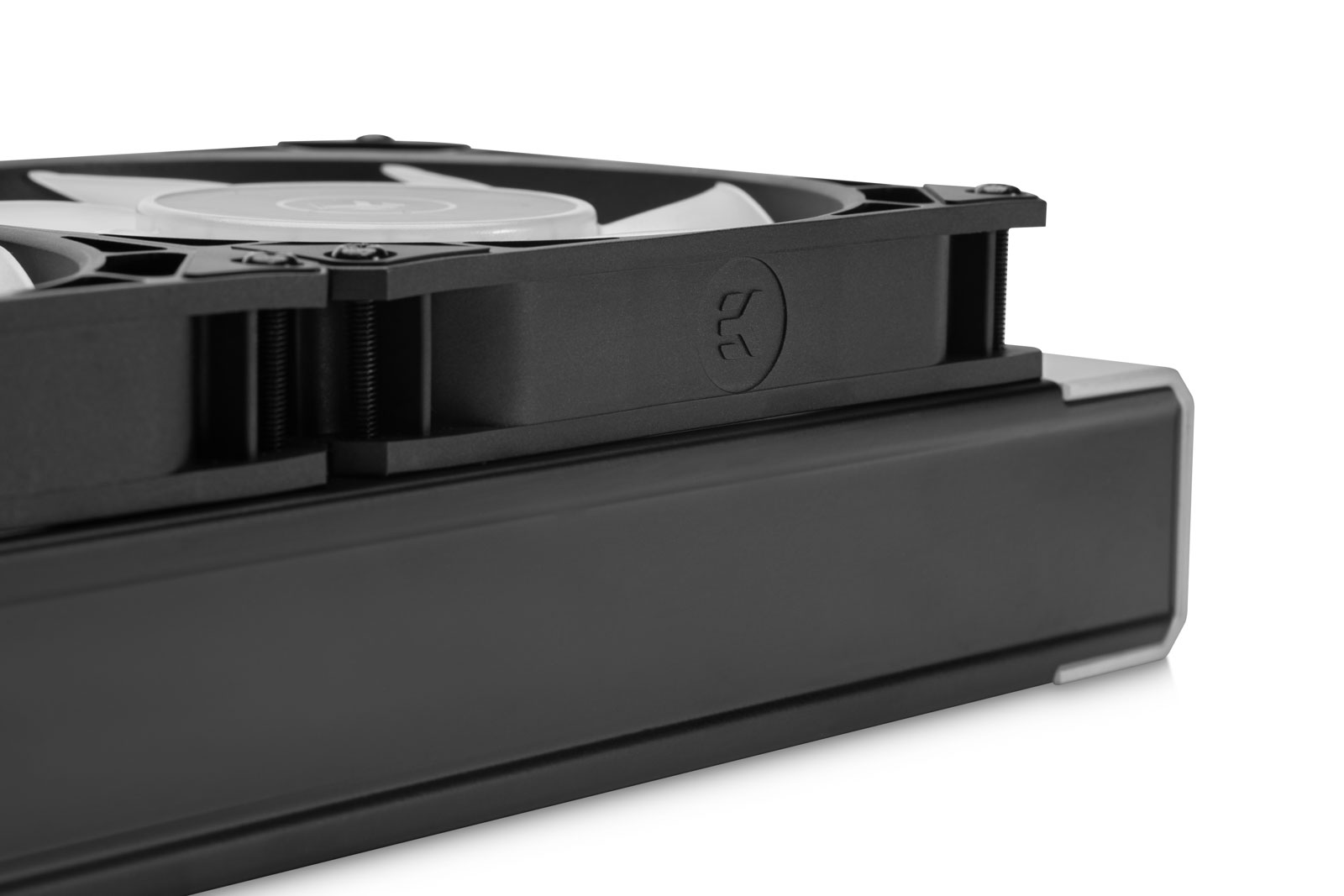 Rubber corners are implemented on both sides of the fan to reduce vibration transfer to the rest of the PC. 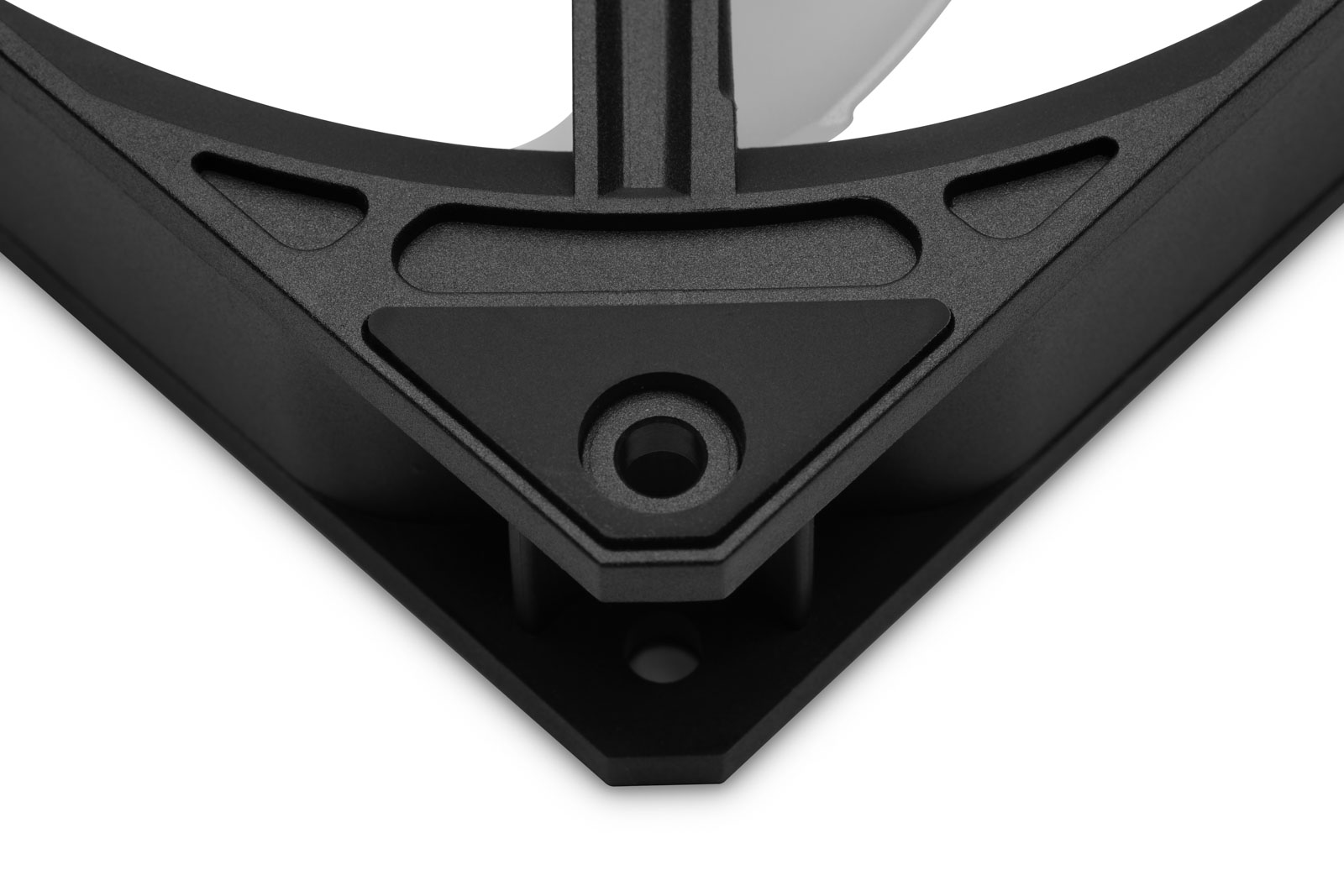 The EK badge on the frame is applied in two orientations, allowing users to achieve optimal logo orientation for aesthetic reasons.

The cable can be optionally moved over to the other side if it eases cable routing. 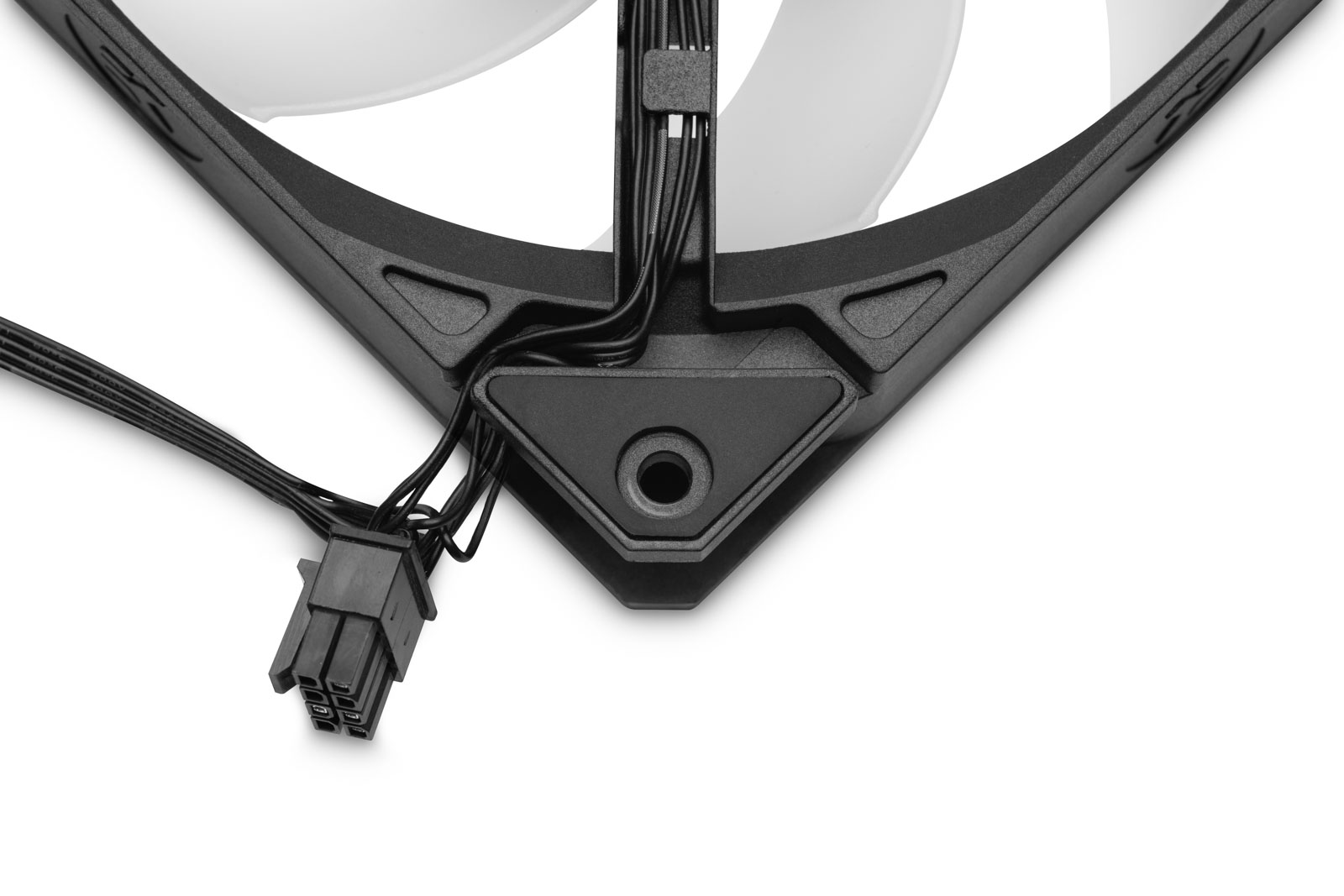 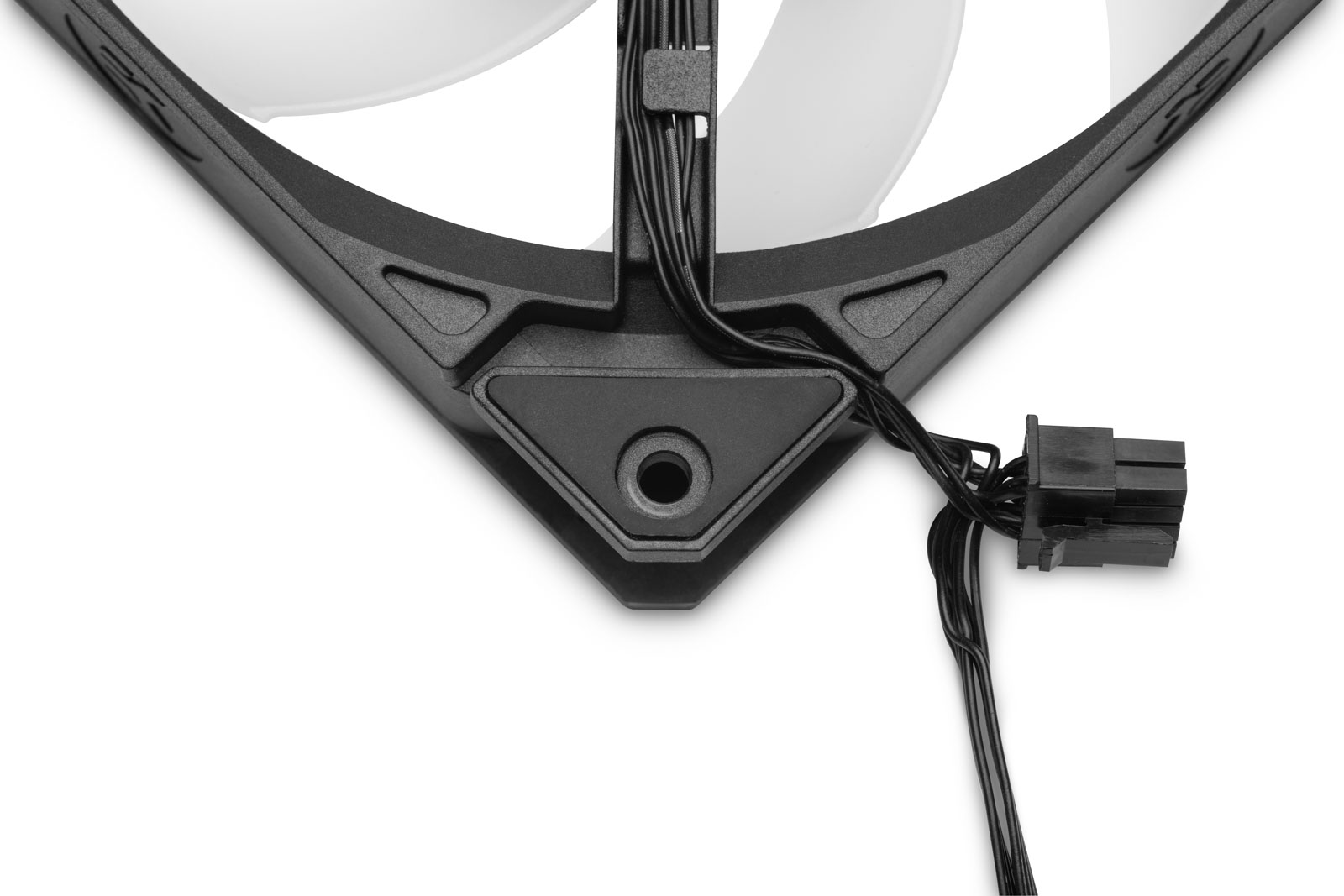 The EK-OmniLink design resolves the cable clutter issues of unifying the connection of multiple fans onto a single PWM and D-RGB header while maintaining complete flexibility if you want to remove a single fan from the chain. Other similar solutions on the market use interlocking mechanisms, which require the removal of the entire fan link when you need more room to tighten a fitting on a radiator. 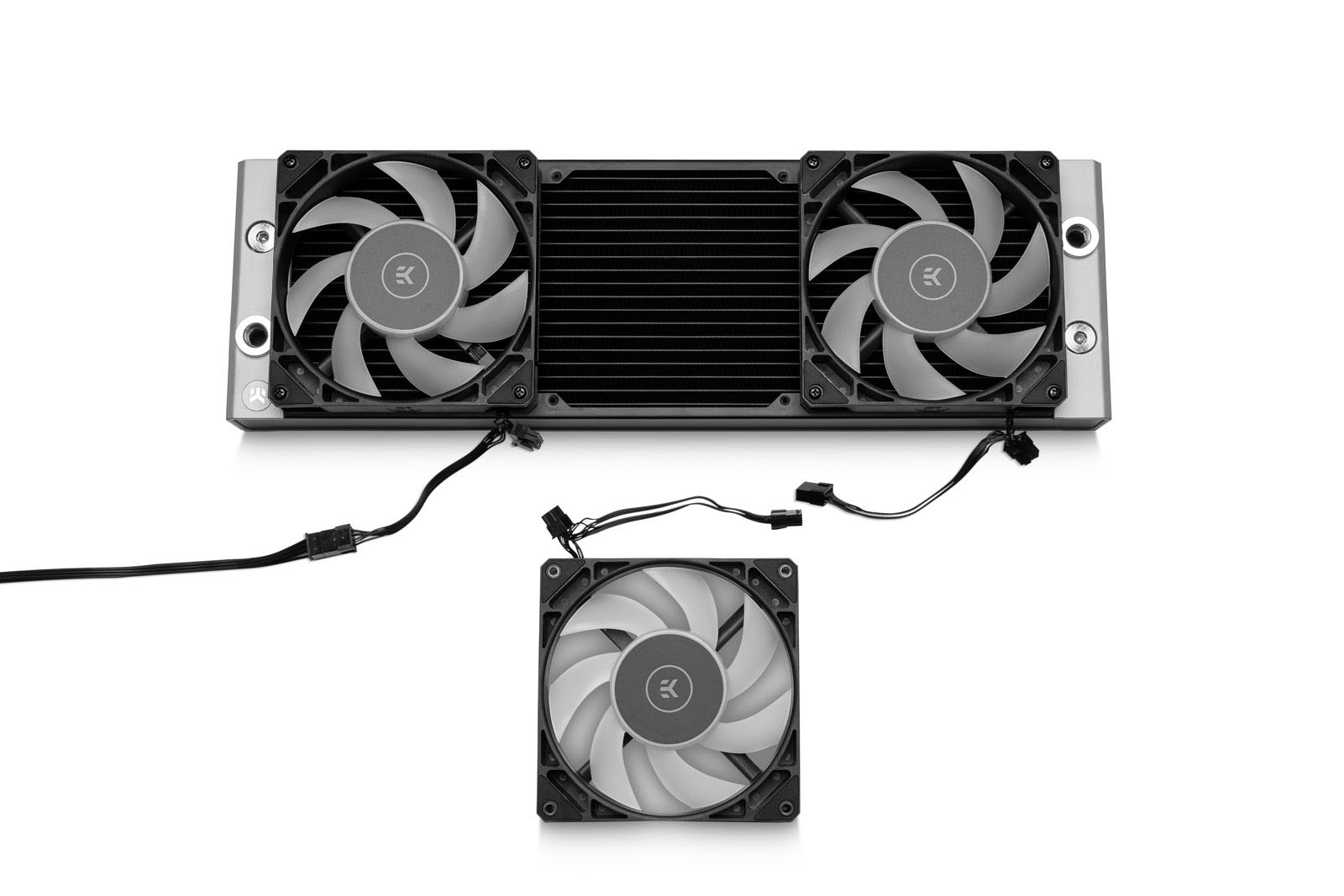 A new motor with a Fluid Dynamic Bearing will significantly reduce noise, especially during low RPM operation. Operational friction is kept at very low levels even after years of service, unlike the traditional ball-bearing fans, which get noisier with time. 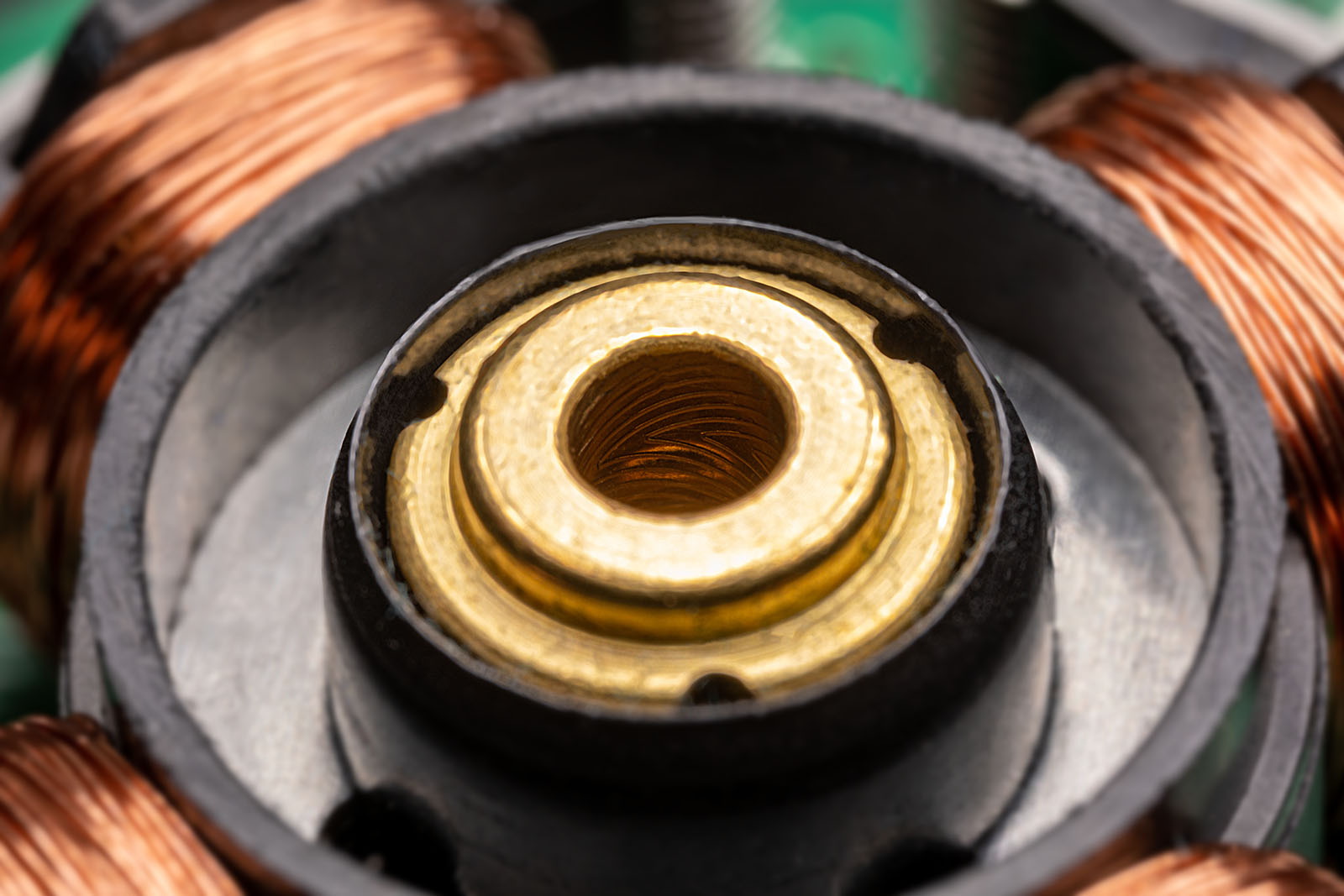 FDB fans can be mounted both horizontally and vertically without issues or reduced longevity, unlike traditional sleeve-bearing fans. Innovative herringbone grooves are applied to the fan bearing, recirculating and distributing oil naturally between the rotor shaft and bearing to maintain stable and silent operation at high speeds.

Four of six EK-Loop FPT fan versions have D-RGB LED lighting in the motor hub. A perfectly balanced milky-colored 7-blade impeller design is optimized for light dispersion and high static pressure operation while maintaining a low noise profile throughout the whole operational range of the fan. 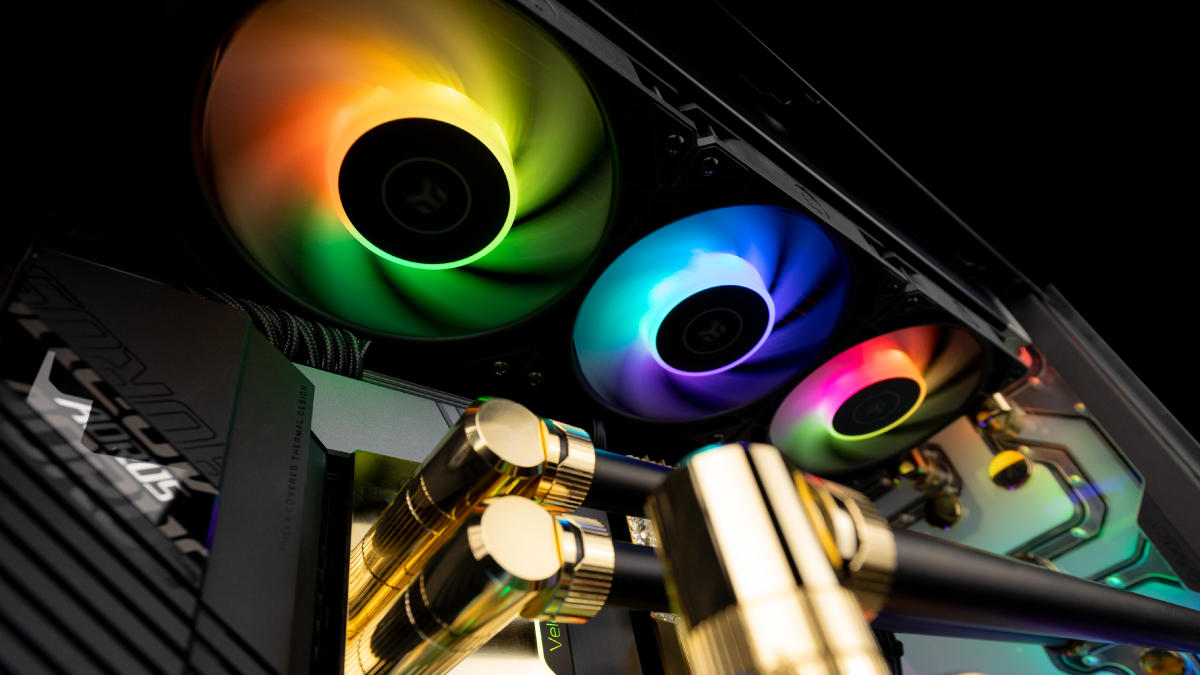 Having LEDs exclusively inside the rotor ensures the maximum possible length of the fan blades and, thus, better performance. Under the motor hub, there is a total of 9 upward-facing LEDs that provide optimal light diffusion in broad daylight as well. 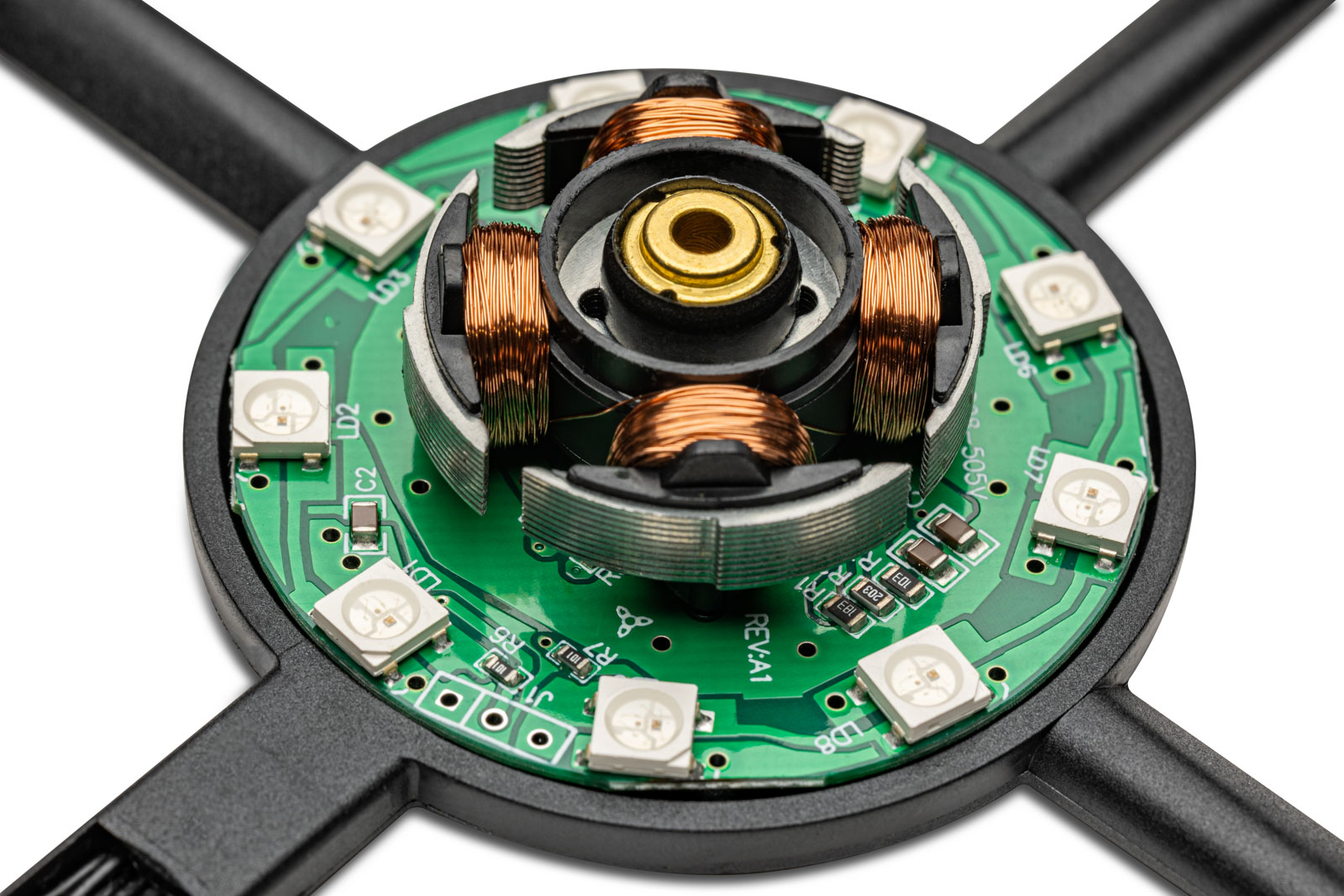 One of the key features of the new EK-Loop Fan FPT D-RGB fan is its simplicity – it uses the standard 3-pin 5V D-RGB connection, meaning you can use it with any standard 3-pin 5V addressable RGB controller or any of the popular RGB sync technologies from all major motherboard manufacturers. The arrow marking on the 3-pin LED connector is to be aligned with the +5V marking on the D-RGB (ARGB) header.

EK made sure that the white shade of FPT fans matches the shade of the most popular white cases on the market to promote color uniformity and make it easier for customers to match the new fans with their PC cases. The white models of the FPT fans come with white cables, connectors, and rubber dampers. 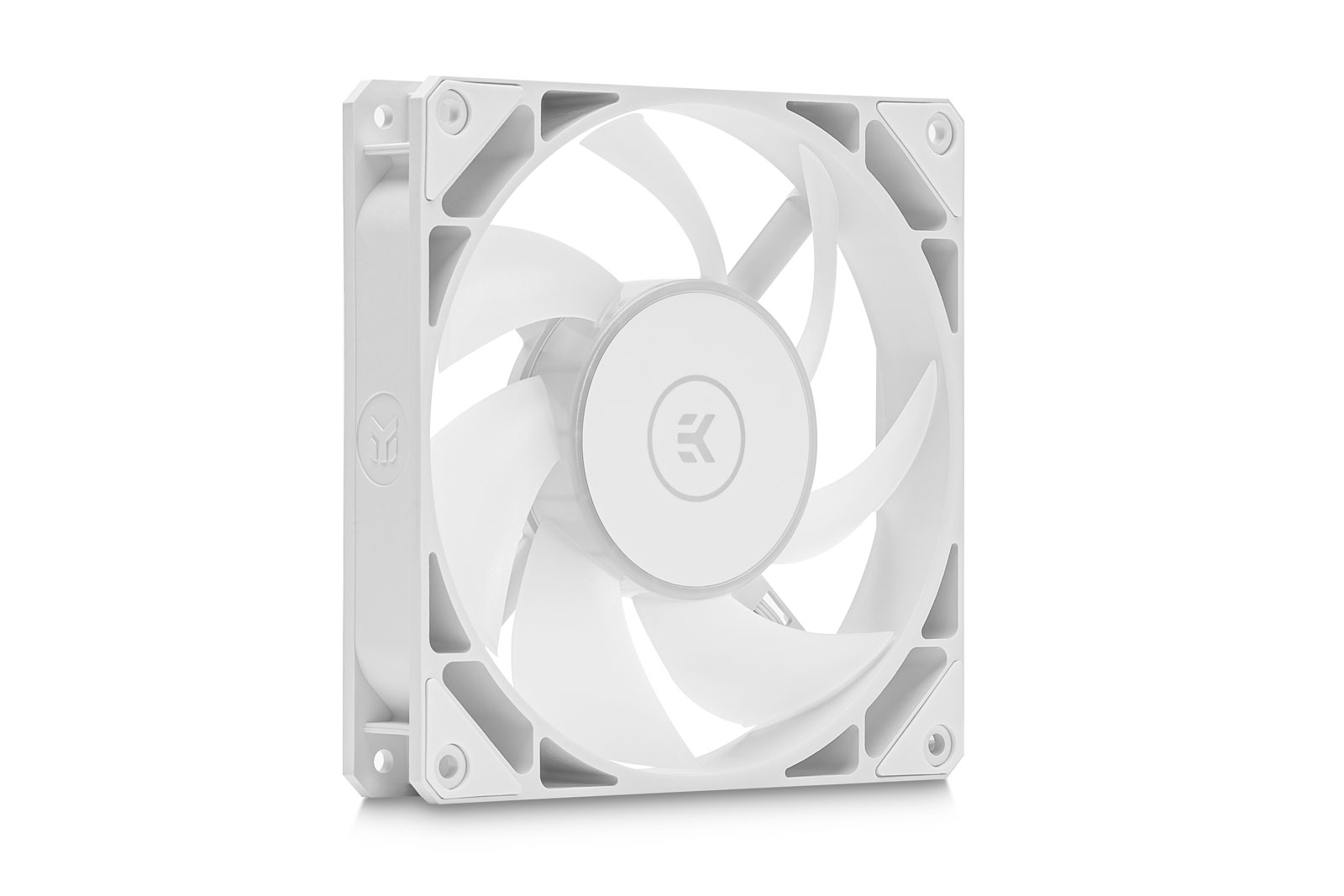 The EK-Loop FPT 120 and 140 fans are available for purchase through the EK Webshop and Partner Reseller Network. In the table below, you can see the manufacturer-suggested retail price (MSRP), VAT included.