Does reversing the ports on GPU water blocks have any performance impact?

The ideal coolant flow path with EK-Vector series full cover GPU water blocks is when the coolant enters the cooling engine on the center of the fin structure through the jet plate and then flows out on both sides on the fin structure. A flow path like this effectively splits the liquid to both sides of the fin stack through the hottest part, the middle of the fin stack which is placed right about the GPU die. After that, the liquid fills up the rest of the block where RAM a VRM cooling is taking part and finally meets up at the outlet hole.

What happens if you use reverse flow in contrast to the ideal flow path?

By swapping the ideal setup for the “in” and “out” ports on the GPU water block, the liquid path is reversed, which is why it’s called “reverse flow”. The coolant will first pass over the RAM and VRM section and then enter the fin stack from the sides.  When the water block is filled up, the liquid meets up at the middle of the fin stack and exits through the jet plate and flows to the terminal. Sounds totally wrong, but actually, it doesn’t make much of difference.

Through EK’s internal testing, we can assure you that the difference in cooling performance while using the reverse flow in GPU water blocks is insignificant. The performance test was run 5 times consecutively and the average of the flow rate and GPU core temperature was recorded.

Using a D5 pump on our test setup, the coolant flow rates are actually the same. 238 L/h in the ideal setup in reference to 240 L/h with the reverse flow. We can easily say that the volumetric flow rate is the same in both scenarios and the small difference recorded is only due to the margin of error while testing.

The temperature difference recorded on the GPU core while using the EK-Vector RTX 2080 Ti water block in ideal versus the reverse flow path scenarios is… drum roll… 1.5°C. Yes, only 1.5°C. Of course, this it can vary a bit depending on which card you own, the voltage it runs on, if its overclocked, what is its BIOS power limit etc. But in general, you can expect an average of less than 2°C worse performance when running reverse flow, compared to the ideal flow setup. 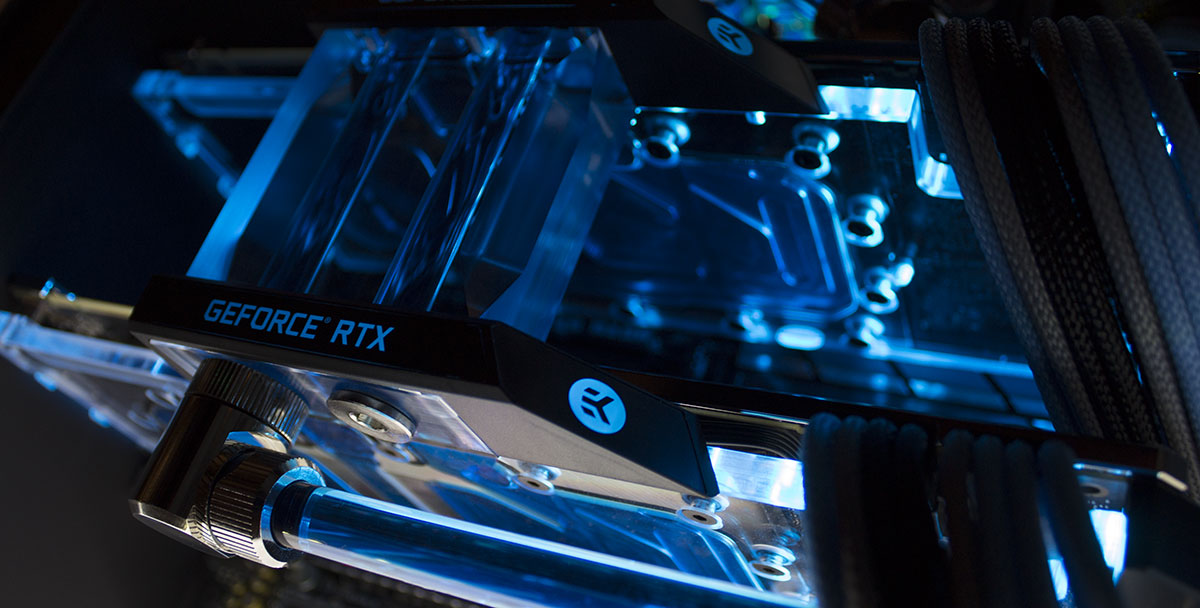 What about EK-FC Classic water blocks?

Similarly to the EK-Vector blocks from the Quantum Line, the performance of EK-FC GPU water blocks from the Classic Line is not too adversely impacted by switching inlet and outlet. The cooling engine is made so that the swich reduces turbulance of the coolant before getting into the microfin area over the GPU block. The reduction in cooling performance is almost negligable, so be sure to follow your prefered tube routing that would make it easiest for you to set-up your loop and get the best possible aesthetic results.

In essence, unless you’re a competitive overclocker, we advise you to use whichever flow path suits your loop order best and the one that makes for a more aesthetically pleasing result. Since using a water block over the stock air cooling solution already offers significant cooling performance improvements, such a negligible difference in GPU core temperature with using the reverse flow setup will not be worth sacrificing the perfect looks of your PC.

Of course, the above is not true for all products, for CPU blocks and monoblocks do not share the same design. They can carry bigger flow and cooling penalties for using reverse flow. We will address this in one of our upcoming blog posts. We hope this article helped you to decide on the best tube routing and loop order to make your liquid cooled rig the most satisfying experience for you.

Looking for a water block for your GPU?

Visit our shop and check out our Quantum Line water blocks for many modern GPUs.

Did you know? – You can use the pump mount on the reservoir

Did you know? – We are offering all kinds of spare parts
Scroll to top